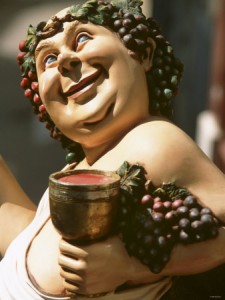 Bacchus – The Roman God of Wine

You might remember that in C.S.Lewis’ Narnia stories Mr Tumnus the Faun recounts how they used to have jolly times with Bacchus and Silenus. Lewis was criticized for bringing such blatant paganism into his works.

What was he thinking??!!

In writing to Don Giovanni–a Catholic priest, Lewis commented on the matter and  observed that  modern man was in such a lamentable state that perhaps it was necessary “first to make people good pagans, and after that to make them Christians”.

What did he mean by “good pagans”? He meant that pagans had certain traits that modern men don’t have. They had a sense of the supernatural welling up within the created order. For the pagans the hills were alive with the sound of centaur’s hooves. The skies were alive with the gods of planets and of stars. The trees danced as dryads and the waters danced as naiads. The pagans were cruel and bloodthirsty, but they were also noble in a Stoical kind of way. They were earthy and lusty and violent, but they were also vibrantly alive.

In contrast consider the puritanical atheist of the modern world. Ensconced in his sterile world of steel and glass, he moves about afraid of germs. Continue Reading