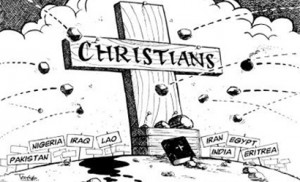 This article highlights the increasing persecution of Christians worldwide.

Christians may be the most persecuted group in the world, and their persecution is on the rise. As Islamic extremism takes hold and repressive governments step up their campaigns against Christianity, the Pope has been moved to warn of “a form of genocide”, and for campaigners to speak out over “religio-ethnic cleansing.”

Organisations that monitor religious persecution have rung alarm bells worldwide, from South America to sub-Saharan Africa and from Asia to the Middle East, warning of a rapid increase in attacks and repression, The Guardian has reported.

It quotes the Pope, who, on a recent trip to South America, said he was dismayed “to see how in the Middle East and elsewhere in the world many of our brothers and sisters are persecuted, tortured and killed for their faith in Jesus.” He continued:

“In this third world war, waged piecemeal, which we are now experiencing, a form of genocide is taking place, and it must end.”

Lord David Alton, who led the Lords debate told the House: “Some assessments claim that as many as 200 million Christians in over 60 countries around the world face some degree of restriction, discrimination or outright persecution.

“Whatever the real figures the scale is enormous. From Syria, Iraq, Iran and Egypt to North Korea, China, Vietnam and Laos, from India, Pakistan, Bangladesh and Sri Lanka to Indonesia, Malaysia, Burma, from Cuba, Colombia and Mexico to Eritrea, Nigeria and Sudan, Christians face serious violations of religious freedom.”

Examples of this persecution are not hard to find. Archbishop Welby recalled a man who he had met “like Job, sitting on a heap of ash. The raiders had killed his wife and six children. He had hidden down a well for three days.”

Go here to read the whole article. An excellent book on the subject is John Allen’s The Global War on Christians: Dispatches from the Front Lines of Anti-Christian Persecution