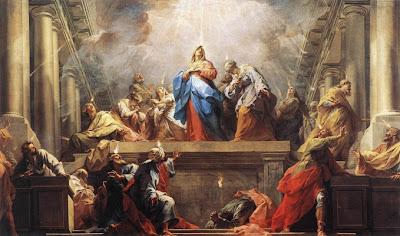 Is it ‘me and Jesus’ or ‘me and the Church’? This is the question of ecclesiology and the difference between Catholics and Protestants on this issue is illustrated by two different perspectives on Pentecost. I think it is fair to say that most Protestants do not have an ecclesiology, or if they have one they do not have a coherent ecclesiology. That is to say, they don’t think much about the church, or if they have thought about the church their conclusions are incoherent or incomplete. This is because most Protestants work from the individualistic experience of Christianity as a starting point, and most Evangelical Christians (as opposed to Anglicans, Lutherans etc) work almost exclusively from the individualistic point of view. For them the Church consists of ‘all believers everywhere whose identity and numbers are known by God alone.’ Actual churches and denominations are considered in a utilitarian manner. They are a necessary practicality, but none is better or truer than another and the individual believer in Jesus simply needs to choose the one which works best for them or is the one they like best.

Therefore the Protestant understanding of Pentecost focuses on the tongues of flame descending on the heads of each individual disciples. That’s about it. The Holy Spirit comes down and grants each individual divine inspiration and a rapturous experience of the supernatural love of God. Now that’s all well and good, and Catholicism does not deny the individualistic experience of the Holy Spirit. However this is a minimalist understanding of Pentecost. It is, if you like, Mere Christianity when we should really all want More Christianity.

More Christianity invites the Protestant individualistic believer to look again at the significance of Pentecost. The Catholic portrayal of the event in the illustration above reveals the depth and breadth of meaning from the Catholic perspective. In this portrayal the tongues of flame do indeed descend on each of the disciples, and they are variously awed, stunned, flattened and devastated by the power of God in their lives.

However we do not see them merely as ‘disciples’ but more as apostles. The Holy Spirit descends on the chosen twelve thereby revealing the fulfillment of Christ’s promises to his Apostles and showing that it is not just disciples, but the Apostolic Church which is filled and inspired by Christ’s Spirit and (be logical extension) his authority. When he was on earth Christ exercised his divine authority by teaching the truth, healing the sick and taking authority over evil. He instructed his apostles to do the same saying, “As the Father has sent me, so I am sending you.” He promised the Holy Spirit, the Comforter, who would remind them of his teachings and lead them into all truth.” This Holy Spirit descends on the Apostolic Church inspiring them and filling them with the authority and power that the Lord promised.

Furthermore, the painter places the event within the Upper Room. It is no mistake that this same Upper Room was the place where the Holy Eucharist was instituted, and where, by virtue of his command that they ‘do this in remembrance’ the Apostles were ordained and had bestowed upon them the priesthood of Christ. This same Upper Room where the Eucharist was established is also the location for the descent of the Holy Spirit. The five can therefore never be separated: The Holy Spirit, the Mystical body of Christ the Church, the Mother of God, the Eucharist and the Apostolic Authority. The five come together in the painting as the central feature is a large and permanent altar, on which the Mother of God stands and around which the apostles circle.

The Upper Room is painted as an exalted building with classical columns and an overarching ceiling which is open to heaven itself. This place is a Bethel–a threshold of heaven–the doorstep of transcendent glory. The place where the Holy Spirit descends is therefore shown to be the Church–empowered and strengthened by the pillars which are the apostolic authority and at her center the Mother of God who is also the Mother of Christ and therefore the Mother of the Church.

That this room is a solid, classical structure with columns, floor and altar and ceiling reminds the viewer that the Church is a temple and that the members of the church are living stones. It also reminds the viewer that the Church is not an invisible and spiritual reality alone, but it is a solid, historical, tangible reality. The Church, like the Body of Christ, is real. It is identifiable in history. It has a definable set of dogmatic beliefs and moral teachings. It also has a structure, a hierarchy, a code of law, and a system of governance and authority. It is something solid and substantial and historical.

All of this, we believe, was founded and continues to be inspired and filled with the power of the Holy Spirit. Individual experiences of the Holy Spirit are a good thing. However, Catholics recognize that on their own, they are ephemeral, subjective and unreliable. How do we know that what a person says is the Holy Spirit is indeed the Holy Spirit? As C.S.Lewis said, that ‘religious experience’ may simply be the result of a very good dinner. Likewise it may be an ordinary human psychic or emotional experience. It may be something manufactured by a blend of powerful oratory, emotional music and feelings of guilt or exaltation. It may even be the manifestation of disordered and evil spiritual entities.

This is the church we see being established at Pentecost, and this is the Church which subsists today in the Roman Catholic Church.