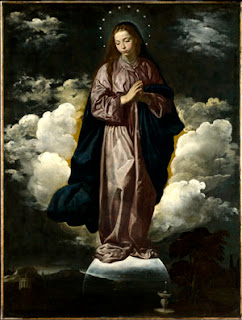 Once again I am grateful for Flying Vic’s comments. So often when I am pondering what post to compose next he will spark an idea or demand a response, and the question and its answer is most often worth getting out to a larger audience. In this instance Flying Vic is reacting to Fr.Z’s riposte to Addison Hart’s reasons for leaving the Catholic Church to return to some form of schismatical Anglianism. You can read Fr Z’s fisk of Addison Hart’s comments here if you’re interested.

Here is FlyingVic’s response:
I’ve read Fr Z’s dissection, however, and I think it encapsulates, for good or ill, all the reasons why I am an Anglican rather than a Roman; in essence, it is the application of human logic to matters that are most definitely divine. When our line of argument leads us into definitive statements about what God would or would not do in situations about which we have no historical knowledge whatsoever, then surely we are being presumptuous? You yourself, Father, tried to slap my wrist a few weeks ago by saying that you preferred not to deal in suppositions: what is belief in either the Immaculate Conception or the Assumption of Mary if it is not supposition? That these beliefs may be an aid to devotion I can happily accept (and as an Anglican, as you well know, I am welcome to embrace them if I so wish); but to elevate them to the level of things-that-must-be-believed-or-else is, frankly, un-Christ-like. Can you show any instance in the Gospels where Christ imposes any comparable condition of belief upon a follower or an enquirer?

I certainly understand Vic’s wish that the Marian dogmas were kept as pious opinions rather than dogma. It is a view I held for a long time as an Anglican. However, Fr. Z did explain how Catholics believe in a hierarchy of truth. Some dogmas are more important than others. He admitted that it was perfectly possible to be a good Catholic and not necessarily have a high and mighty love for the Marian dogmas. It would be admissable (one could argue) that one’s acceptance of these dogmas might simply be on the level of not denying them. I have known very good, practically minded converts who have said, “Well, once I accepted the papal claims the rest followed. If the Pope, speaking for the whole church, said we are to hold to these dogmas, then I accept them.”

We are charged with the Marian dogmas being mere supposition, and that the church should not have turned into dogma what was mere supposition. However, this is what the church has done from the beginning. The creeds are the product of the church engaging in exactly this process. So for example, from the evidence of the New Testament alone we have ambiguous understandings of the divinity of Our Lord. The Arians found evidence that Christ was not co equal with the Father, while the Adoptionists saw in the Baptism of Our Lord, evidence for their false understandings of Christ’s nature. As the Church developed a clear understanding of the Divinity of the Lord she clarified and codified it in dogma. The same is even more true of the doctrine of the Holy Trinity. Evidence in the Scriptures is scarce and opinion in the church was divided. It would have been much easier to say, “Well, you know, this Holy Trinity business is really rather complex. It is not much more than supposition based on a few scraps of Biblical evidence. Let it remain a pious opinon.” However the Church, under the guidance of the Holy Spirit, decided that it was dogma and was necessary for the fullest understanding of God’s revelation.

If one accepts the historic creeds, then one must accept the validity of the process whereby those creeds were hammered out and finally accepted by the whole church. You cannot have the creeds without silently accepting the authority that promulgated the creeds. It is that same authority operating within the Church that consulted, debated and finally decided on the various Marian dogmas. What I found interesting while researching my book Mary-A Catholic Evangelical Debate was that the Marian dogmas were not ‘late inventions’. It is true that the Immaculate Conception was only defined dogmatically in the nineteenth century and the Assumption in the twentieth, but both dogmas were rooted in the earlier defined dogmas about the Blessed Virgin and were a natural development and outgrowth of them. (Bl. John Henry Newman’s essay on the Development of Doctrine is a very important resource to clarify and explain how this process works.)

My final point is this: if one accepts the creeds, then not only must one accept the authority that determined those creeds, but one must also read the history and see that at the same time that the church was deciding the dogmatic formularies concerning the divinity of Christ and the Holy Trinity, she was also deciding on the true identity of the Mother of God. In fact, the definition of Mary as Mother of God at the Council of Ephesus was given as a defense against Christological heresy. If one does not have a correct view of the Blessed Virgin (say the fathers) one cannot have a correct view of her Son. From the dogma of Mary Mother of God, all other dogmas about the Blessed Virgin logically follow. That they may follow is accepted by Anglicans, that they must follow is what is disputed.

This is why the argument, like all arguments in Protestant-Catholic debate, must come down to the authority question. It’s very simple: we believe in the Immaculate Concpetion and the Assumption because the Pope tells us to. Put less baldly–we believe in the Immacualte Conception and the Assumption because the whole church has been brought to the point where we now understand that these beliefs are an essential part of our understanding of God’s whole work of redemption through the incarnation of his Son. The Pope has simply voiced this belief and the joyful affirmation that is indispensable if we wish to enter into the fullest acceptance of the miracle of God’s saving work.

My plea to a Protestant who is considering Catholicism, (but is stuck on the Marian dogmas) would be, “Just let it be for now. Don’t actively deny these things. You might just be denying that something greater than you that you don’t understand, and which might just be a great gift. If you think they may be pious opinions, then join us and hold the opinions piously. If you truly do not deny these dogmas, and if you come to hold them piously, then perhaps one day you will come to a point where you also see their necessity. Until then, don’t blame the Catholic Church for calling all to receive what she has come to understand as a great blessing. Have an open heart and accept with joy what is offered.”

This is the attitude of ‘More Christianity’–one which I encourage whenever I can, even when (on this blog and in my personal life) I fall from my own ideal and lapse into pettiness, mean ness or lack of charity.