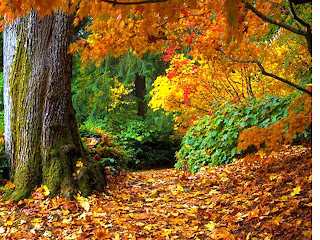 
This morning’s Autumn sun came slanting through
the trees of burnished orange and flaming red.
Crimson and gold fire flashed against the blue,
bronze and vermillion gashed, and nature bled–
as if the whole world was ablaze with blood.


So it seemed as we drove to school that day:
the children laughing and oblivious;
innocent and ignorant in their way,
of insights, that to me seemed obvious.
They knew nothing of brimstone or the flood.


The tempest and the trumpet, the earthquake
wind and fire, passed them by like yesterday’s news.
They are still unconscious–not yet awake
to lateral realities and deeper truths:
There are things they have not understood.


They have not seen the invisible hosts
Gathering in the maelstroms of the night,
nor known the whirling gyres of nature’s ghosts
swirling beneath our ordinary sight.
They see the surface, but not the deeper Good.


So this morning’s Autumn ride was something more:
Each trembling tree became a burning bush:
or Eden’s angels’ flaming swords of war.
My car was a fiery chariot rising in a rush.
The leaves were crimson dripping from a cross of wood.


At the start of an ordinary day,
I glimpsed the burning penitential pyre.
In the middle of the wood I saw a way
to explain man’s destiny and desire.
I gazed and took in as much as I could,