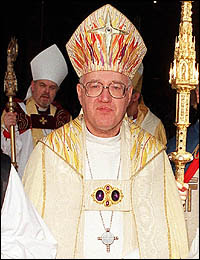 Dr George Carey, the Archbishop of Canterbury who pushed women’s ordination through the Church of England in the early 1990s has been in North Carolina for some weeks now. The story is that he is globe trotting, quietly ‘ministering’ to the morally conservative Anglican Evangelicals.

This is code for ‘rallying all the Evangelicals’ to fight against the insidious homosexualist agenda. Within polite Anglicanism this is definitely a ‘no no’. Retired Archbishops of Canterbury aren’t supposed to run about undermining their successor. They’re supposed to retire to a beautiful home in the English countryside, accept their new noble title, drink Earl Gray tea, write their memoirs and engage in a quiet hobby like producing a new edition of obscure sermons of the Cappadocian fathers or breeding Afghan hounds.

Not our George. he’s busier than ever on the speaking circuit. In fact a buddy of mine recently attended one of Lord Carey’s lectures at Duke University. In the Q&A; afterward my pal asked Lord Carey if he thought all efforts of ecumenical discussions between the Catholic Church and the Anglican Church were at an end. Lord Carey’s reply was along the lines of, “I believe there are still possible ways forward on individual levels.” The next question was, “And don’t you accept some of the blame for this as your introduction of women priests into the Church of England brought about not only a huge division in your own church, but imposed new grave obstacles in the path to unity with Rome?” The former Archbishop’s reply was, “I have it on good authority from cardinals in the Vatican that the Catholic Church will be ordaining women in the near future.”

Hello? Can we have a reality check? Is this man in touch with the real situation at all? But should we be that surprised? This is the fellow who dropped a huge clanger in the first few months of his induction to Canterbury by saying that anyone who was opposed to women’s ordination was “in serious heresy.” Good opening remarks to get the ecumenical ball off on the right foot. Then, when visiting Rome he pulled another diplomatic gaffe by publicly calling on the Catholic Church to allow full intercommunion with Anglicans. Then, when Pope John Paul issued his moto proprio on women’s ordination stating quite clearly that the Church had no authority to ordain women, and that this was final and was to be held definitively by all the faithful, dear old George said, “We would like clarification on this…” Seemed pretty clear to me.

What wasn’t clear was how George Carey–a good Evangelical Bible believer–could endorse women’s ordination in the first place. When people raised 1Timothy 2:12 (Where St Paul says he does not allow women to have authority over men in church) the argument among Evangelicals of Carey’s ilk was, “We are not certain that was written by Saint Paul, but even so, we now have a better understanding of male and female roles in the church and are not bound by the cultural restrictions of that time.”

Only problem was, when Dr Carey and his fellow feminists tried to exclude the homosexualists, they pulled the same argument on him. When told that the Bible prohibited homosexuality the homosexualists simply said, “We’re not certain those passages were written by Saint Paul, but even if they were, we now understand more about human sexuality than they did back then, and we are not bound so much by the cultural understandings of that time.”

What can you do with reasoning like that? With that kind of slippery thinking you can do what you like. It’s like wrestling in jello. Where is a sincere Anglican to turn to find some sort of answer? The whole house has been built on quicksand. Where is there a solid rock on which to build?