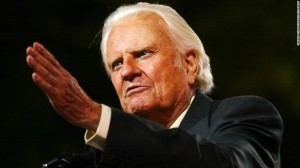 My post for Aleteia this week compares the preaching method and message of Billy Graham and Pope Francis.

I sometimes think the Pope is more Evangelical than Billy Graham.

Like most Evangelicals of his generation, Graham was famous for inviting people to turn from their sins and have a “personal relationship with Jesus Christ.” Time and again Pope Francis uses similar language. Echoing his two predecessors, Francis invites his hearers to the “encounter with Christ.” For both Billy Graham and Pope Francis, Jesus Christ is not a dead martyr, but a living Master, and like every good evangelist, Pope Francis explains the key that unlocks a dynamic encounter with Christ the Lord.