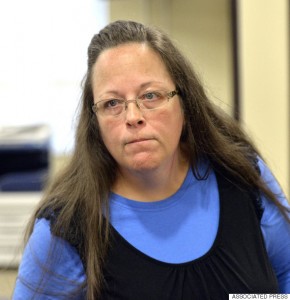 As Kentucky clerk Kim Davis does jail time I have been thinking all day about her case compared to St Thomas More.

What should a Christian do when their conscience clashes with the law of the land? When they actually work for the government the situation is different than that of an ordinary citizen.

Thomas More was expected, as Chancellor of England, to affirm the King’s supremacy and condone the  King’s illicit marriage.

He could not do so in his official capacity so he resigned.

While I respect Kim Davis’ courage and unwillingness to compromise her faith, I think the right course would be for her to resign.

The King pursued the matter from the realm of state employee to that of private citizens, and when that happens a Christian must stand his ground.

Within the government workplace however, I think the first sacrifice is for the person to resign and look for another job.

A resignation is not a compromise and it is not condoning something the religious person cannot condone.

Neither is a resignation an escape. It is a clear public statement which requires considerable sacrifice.

It will be interesting to see how this develops. I am under no illusions about the direction of this debate.

Those who resign, like Thomas More, will be pursued. The fact that someone continues to disapprove–even within the dignity of privately held silence–will not be tolerated.

Those who cannot approve of same sex marriage will be hunted down, and orange jumpsuits may soon become a replacement in the iconography for the martyr’s palm.