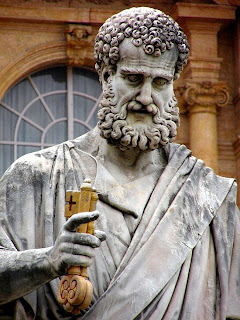 The British monarchy helps explain the reading from Isaiah 22 at Mass today. The prophet says that the Lord will take the office of steward from Shebna and give it to Eliakim. The office of steward was like that of Prime Minister. In England the Prime Minister is asked to form a government by HM Queen Elizabeth II. He actually has no power until he takes a car to Buckingham Palace and meets the Queen in person and she personally and formally delegates her authority to him.

The steward holds the power and authority of the monarch and exercises that authority in his absence and by his specific delegation. The Old Testament passage also indicates that this is not simply a position of power and prestige, but the steward is to be known as “the Father of the inhabitants of Jerusalem.” Jerusalem is the holy city, and as the Hebrew monarch was also the head of the religion, the steward would also have played a religious role and, if you like, could be called, “Holy Father.”

The interesting thing in both passages is that this authority is divinely given. It is not a human invention. The prophet Isaiah says the Lord will put down Shebna and raise up Eliakim to bear the authority of the King. In the gospel, Prime Minister Peter’s authority is based on his confession of Jesus Christ as the Anointed Son of God, and Jesus recognizes that this inspiration and insight was given to Peter by God. It was not just a good idea or a theory or a human invention.

Protestants say that churches are man made institutions. We have to agree with them. Their churches are man made. The Catholic Church, however, claims something far more stupendous and wonderful–that she is not a man made institution. The Catholic Church is not only established on the Rock of Peter by Jesus Christ himself, but it has divine origins in that the Holy Spirit inspired Peter to recognize the Christ. He was also inspired to pick up this role and be the key preacher at Pentecost and the first Prime Minister of the Kingdom of God.

Unfortunately too many Catholics forget the divine origin of the Catholic Church and fall into Protestant speak. So they say of the church’s dogma or moral teachings, “Yeah, well, those are just man made rules.” Are they? The church does distinguish between matters of church discipline which are man made rules. These can be dispensed by the proper authority. However, the dogmas of the church and the moral teaching of the church are not man made, and Catholics don’t really have the liberty to pick and choose which they like.

Instead we remember that the church is founded on Prime Minister Peter. The role is a successive one, and his successor lives today just a few hundred yards from where Peter himself was martyred and buried, and you can see him there exercising his role as steward of the faith and steward of the mysteries of God.

His name isn’t Peter this time. It is our Holy Father Francis.