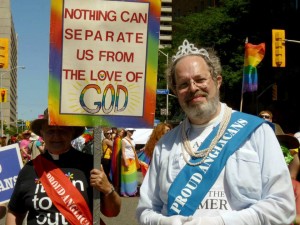 Did you think that perhaps the Episcopalians would respond with humility and repentance in the wake of their suspension from the Anglican Communion?

They have responded openly and bluntly with pride.

We could have predicted this.

In response to the suspension of the Episcopal Church from the Anglican Communion, immediately the Episcopalians play the victim card.

I’ll respond to the question I got from the reporter who called me this morning: What is my response to today’s statement?

Primarily pride. Pride that we have become a church where using the lives and vocations of our LGBT members as sacrificial lambs on the altar of global Anglican politics is no longer an option. And Pride that our Presiding Bishop made this statement to his fellow Primates:

She actually says that she responds with pride to the suspension and the irony of pride being one of the seven deadly sins never seems to occur to her.

It is necessary to try to get within the progressive Christian head. They actually believe themselves to be the prophetic “brave pioneers” willing to take risks and give all for their noble cause.

What does it mean to Episcopalians to be “sanctioned” by a majority of the Primates of the Anglican Communion for refusing to treat our LGBT members as second class Christians? It means we’re willing to pay “the cost of discipleship” as we follow the Jesus who welcomed, blessed, included, empowered and loved absolutely everybody. It means we take seriously our call to be part of the Jesus Movement — proclaiming the Good News of God’s inclusive love to the world. It means we choose inclusion over exclusion, compassion over condemnation, and justice over judgment.

I predict that this will be the predominant Episcopal response and that after three years they will be rejected from the Anglican Communion permanently and continue their decline until they become a gay religious sect that claims to be Christian.