Seven Ways the Episcopalians Will React to Suspension

Seven Ways the Episcopalians Will React to Suspension 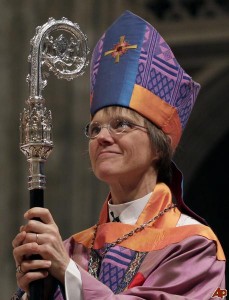 The progressive Episcopal Church of the USA has been suspended from the Worldwide Anglican Communion for three years because of their formal endorsement of same sex marriage. The point of the suspension is to encourage the Episcopalians to reconsider their decision and return to the moral values of historical Christianity and the Biblical principles of Christian marriage.

The chances that this will happen are remote.

Instead the progressive Episcopalians will react in these predictable ways.

1. Sentimentalism – Their response will not be with reasoned argument, proof for same sex marriage from the Scriptures, the church fathers and the tradition of the church. This is not only because there is no such proof, but because they have abandoned the whole idea of objective truth long ago. Instead there will be a good bit of bottom lips being stuck out, combined with “sadness” and “deep concern” about the decision. They will tell everyone how hurt they are and how distressed they are by the decision. They will pull on emotions as much as they possibly can.

2. False Martyrdom – Hand in hand with the sentimentality watch them play the victim card. They will portray themselves as the victims of a “great right wing conspiracy.” Those nasty conservative homophobes ganged up on them. Then they will combine their own sense of martyrdom with that of the homosexuals they champion. They will portray themselves as standing bravely shoulder to shoulder with the poor, persecuted ones. Go here for my post on The Rise of the Crybaby Bully to study this syndrome further.

3. Pride – Ironically the slogan of the LGBTI movement is “Pride”. It’s appropriate because all humility will be absent in their response. Any idea of repentance will be absent from their response. Instead they will hold their heads high with pride. They will march with pride. They will respond with pride, and it will not only be the usual pride and arrogance of the privileged elite, but it will be masked by the faux victim thing. In other words it will be just as nauseatingly self righteous as you can imagine. “We few, we faithful few are the brave pioneers who are marching forward to bring God’s justice to the poor persecuted ones.”

5. Propaganda – Here is Washington Bishop Marianne Budde’s statement: “Bishop Curry (the present presiding bishop of ECUSA) recommitted our church to be a house of prayer for all people, and the primates’ decisions will not change the welcome that all of God’s children will find at Washington National Cathedral and the Episcopal Diocese of Washington,” Notice the fakery here. Nobody has ever suggested that homosexual people should not be welcome in any Christian Church. What caused the divide was the Episcopal Church’s formal endorsement of same sex marriage. The Episcopalians will try to serve the traditional Anglican fudge: They will make statements that are full of ambiguities, “re-interpretations” and high sounding rhetoric which has no real substance. In other words, it will be the usual progressive smoke and mirrors act.

6. Counter Attack – Don’t be deceived by all the hurt faces, the expressions of “pain” and “sadness” and “deep concern”. There’s rage beneath it all and you can bet it is going to come out full strength. Behind the scenes they will go for those who they perceive as their enemies and it will be ruthless. The African bishops will be portrayed as homophobic gay killers. They will be portrayed as ignorant jungle bunnies who ought to mind their own business. It will get racist and it will get ugly.

7. Schism – The Episcopal Church of the USA will leave the Anglican Communion and become just another one of the nearly 150 Anglican style breakaway churches. They will do so with all the emotions above. They will march into the sunset holding their heads high, playing the victim and boasting about how they are glad to be identified with the poor, the persecuted and the outcasts.

All of this is already happening. Here is Rev Susan Russell writing for the Huffington Post. She manages to pack the sentimentalism, false martyr, noble pioneer, self righteous prophet, propaganda, threats and schism all into one concise paragraph….

To be clear: God is not finished with the Episcopal Church yet. We have miles to go and much work to do to overcome the many systemic issues that continue to challenge us as we strive to live into our call to be the Body of Christ in the world. There’s a lot of work ahead – but today I’m proud and grateful that being considered second class Anglicans is a price we are willing to pay to treat God’s beloved LGBT people as first class Christians.