Puppies, Kittens and the Circles of Sin

Puppies, Kittens and the Circles of Sin 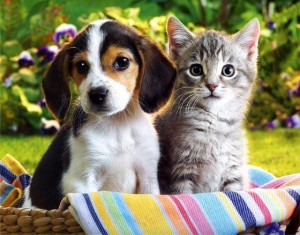 It occurred to me that one of the reasons so few Catholics go to confession is that they don’t really think they have done anything wrong.

Then when they do come to confession many of them make very poor confessions and the first thing they say is, “I’m not really sure why I’ve come to confession because I don’t think I’ve done anything wrong, but I know I should come to confession….” or they make a confession which consists of telling the priest that they feel bad about their boss at work or they have had an unkind thought and they know that’s not very nice…

I’m not blaming the faithful at all. They’ve been cheated out of their faith.

This is the result of sixty years of “Puppy Dog and Kittens Catechesis” in which nobody was ever taught anything about sin and all the talk was about love, sunshine and being God’s children.

This was exacerbated by pop psychology which said everybody was OK and if you were unhappy it was your mother’s fault or your father’s fault or because your fifth grade teacher yelled at you or because somebody at summer camp stepped on your S’more.

Weak minded clergy have swallowed the idea that they shouldn’t talk about sin because that makes people feel guilty and bad and that’s not nice. But this is like a doctor, who knows you have cancer, saying, “I don’t really like to mention the “C” word because that might make you feel uncomfortable.”

Darn it, they’ll be a lot more uncomfortable when the cancer kicks in and they’re in agony!

Consequently, the faithful are honestly ignorant not only about sin, but also about personal responsibility and the necessity of choice. If there is no sin, then there is no real choice for good or evil.

The result of this watered down, lily livered religion is that the faithful really haven’t got a clue what sin is and why it matters.

Therefore, for Lent I decided to preach a series of homilies on sin, and thought it would be helpful to use Dante’s architecture of hell to teach about the nature of sin, the depth of sin and the subtlety of sin. Here’s a link to the podcast of yesterday’s homily.

It is important to stress that this is NOT to make people feel bad and guilty and try to scare them into heaven. (Although I’d rather be scared into heaven than soothed into hell…)