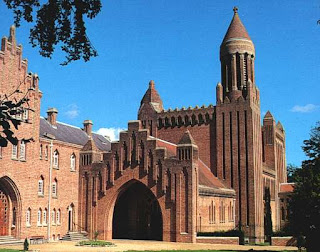 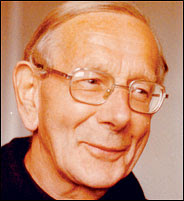 of time at Quarr (pronounced ‘core’) Abbey. Quarr is built just a few hundred yards from the ruins of a medieval abbey. The architect was Dom Bellot–one of the monks who came to the Isle of Wight from Solemses during a persecution of religion orders in the beginning of the twentieth century.
At Quarr I was priviledged to be friends with a monk who has now become pretty well known. Fr Joseph Warrilow. He’s the monk made famous Tony Hendry’s book ‘Fr Joe- the Man Who Saved My Soul’. Fr Joe was all that Hendry made him out to be–a totally humble, joyful and loving saint. Hidden away in a monastery on the Isle of Wight–he was one of many Benedictines I’ve met who’ve changed my life with their simple, down to earth holiness.
The Church at Quarr is a very holy place. You can feel the power of prayer there as soon as you enter. The church is dark, the walls punctuated with t 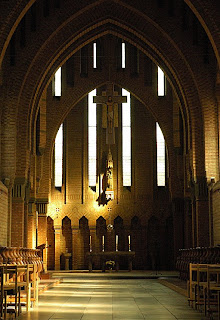 he light from the narrow windows at just the right places. The liturgy at Quarr is traditional, simple and dignified. If you don’t find God there you won’t find Him anywhere.
Quarr was my refuge when struggling with the call to become a Catholic. At the time I was the vicar of two country parishes on the Isle of Wight, just a few miles from Quarr. I would go there and pray and seek guidance.
The crunch moment came when I was there one Autumn afternoon. I had taken a walk across the fields to the ruins of the medieval abbey, then stopped in the church for Vespers and Benediction. I said to God, ‘Why this call to become a Catholic? I only wanted to serve you in the ancient Church in England.’
Then as I knelt in prayer, and the monks were chanting and the incense was rising, the little voice inside said, ‘But this is the ancient church in England…ever ancient and ever new.’
Five months later, on a frosty February night, my wife and I went back to Quarr with a few friends to be confirmed and received into full communion with that ancient church.
PatheosDwight2007-01-17T20:53:00-04:00January 17th, 2007|Categories: Patheos|13 Comments