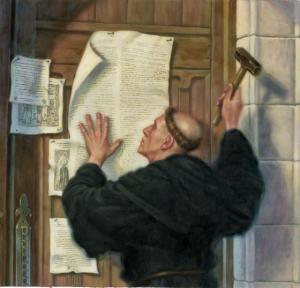 So everybody on the Catholic Protestant divide are supposed to be kissy kissy this month as the 500th anniversary of the beginning of the Protestant Reformation is celebrated.

Well OK, but I hear the predictable moans and groans on the Catholic conservative side of the field reminding everyone what a violent, disaster the Reformation was, while on the Protestant side I’m hearing preachers remind everyone that the Catholic Church is a Babylon mystery religion and that all Catholics are hell headed heretics.

What if we stood things on their head and all of us looked again at the core principles of the Reformation? They are summed up in the famous “solas”–sola Scriptura, sola Fide and sola Gratia. Bible Alone, Faith Alone, Grace Alone.

This article over at my main blog looks at the three and calls the mainstream liberal churches who are all happy about the Reformation to look again at these three core principles and look again at themselves.

I reckon the church needs a new Reformation–and not just the Catholics, but the liberal Catholics and Protestants together, and while they’re at it, all the rest of us could also remember the importance of the Scriptures and salvation by grace through faith.