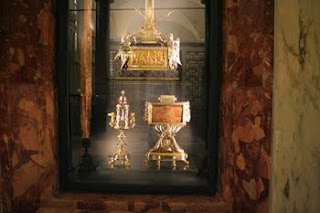 Go here to learn more about the basilica of Santa Croce in Gerusalemme. The legend is that the Empress Helena, Constantine’s mother, traveled to Jerusalem and discovered the true cross. The local Christians said she could have it, but said she must not remove it from the Holy Land, so we got slaves to load her ship with soil from Jerusalem, put the relics on the soil and sailed off to Rome, where she loaded the soil onto a cart, put the cross on it and took it to her palace in Rome, thus fulfilling her promise not to remove the cross from the Holy Land.

I don’t know if this is an urban legend, but I am told that in one spot within the basilica of  Santa Croce there is supposed to be some of the soil from Jerusalem and that this soil was tested recently and found to be from Jerusalem. Among the relics in the church are the incorrupt finger of St Thomas which was put into Christ’s wounds, a nail used in the crucifixion, fragments of the true cross, part of the cross beam of the good thief’s cross, and most interestingly, a part of the title board that hung over the cross.

Today’s feast of the exaltation of the cross dates back to the discovery by Helena and celebrates the victory of Christ through death and resurrection. Words from today’s gospel: “For God so loved the world that he gave his only Son, so that whoever believes in Him should not perish but have everlasting life.”