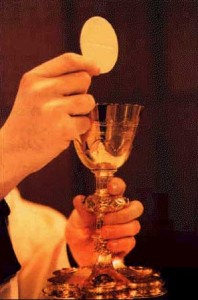 Edward Pentin writes here about the possibility that “in special cases” Protestants might be admitted to receive the Body and Blood of Christ at a Catholic Eucharist.

There are several things which are troubling about this news. The first is the way the modernists attempt change. What they really want is open communion with Protestants, but they know they will never achieve that so they insert the thin edge of the wedge with “special cases.”

The tool they use to do this is sentimentalism and “tough cases.” So we are presented, for example, with a good Lutheran woman who is married to a Catholic, and with long faces they tell everyone how saddened they are not to be able to receive communion together. They tell how they attended the deathbed of the man’s mother and everyone else received communion with her, but the Lutheran woman was excluded.”

This is the tyranny of tenderness. If you object you are perceived as a rigid hardliner, a tough, legalistic, Pharisaical hypocrite. Everyone says, “Awww. That’s so sad. Those Catholic conservatives are so harsh!”

No one stops and uses common sense and asks why, if receiving Catholic communion is so important for this dear Lutheran lady, that she hadn’t taken RCIA and become a Catholic years ago.

However, if the murky world of Kasper Church such common sense and plain talking is not appreciated, and this is the second objection. Those who are pushing for change are deliberately keeping the conversation vague. The issue is not vague, however. The church’s teaching is clear and you should always be suspicious of those theologians who say, “Well, of course it’s more nuanced than that…”

Everyone accepts that real life is messier than the rules, but the rules are established to help make sense of the mess and move forward. If we made the rules according to the mess rather than the other way around everything would be chaos.

As a convert from the Church of England, I need to remind Catholics of a few home truths. This ambiguous, sentimentalists version of Christianity doesn’t have much mileage. The deliberately ambiguous language in order to bring about long term change is the tactic of the wolf not the shepherd. Continue Reading