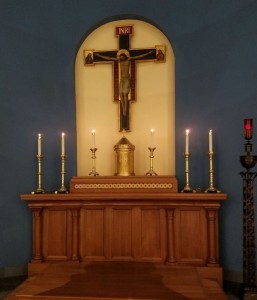 retro altar in the new Our Lady of the Rosary Church

I am re-reading Margaret Barker’s  Temple Theology: an Introduction  and am quite delighted by the way the new temple of Our Lady of the Rosary in Greenville echoes the symbolic furnishings of the Old Testament temple.

Barker believes the furnishings of the temple represented the six days of Creation. So the Holy of Holies stood for the presence of the Most Holy Uncreated One. It also stood therefore, for the first day of Creation in which was the beginning.

Day Two in which the waters above were separated from the waters below also stands for the separation of the visible and invisible, the physical and the spiritual realms. This separation is represented by the veil separating the Holy of Holies from the Holy Place or Sanctuary.

The veil represents the physical, material realm of creation.

The veil is interesting because it was woven from fair linen and wool. The linen was white. The wool was three colors: blue, scarlet and purple. Barker says the four colors represented the four elements of the physical world: White flax represents the earth since flax grows from the earth. Purple represents the water since the dye for the purple came from a mollusk and was thus the fruit of the sea. Blue represents air-sky, Scarlet – fire.

The priest’s vestments were also woven of the same colors. The priest therefore represents the presence of God which will be mediated through the physical human form eventually in the mystery of the incarnation.

Day Three is the creation of the earth and vegetation. This is represented in the temple by the Table of the Shewbread. This stand for God’s gift of the earth and all its fruit and our gift back to him of all he has offered–eventually being offered in bread and wine.

Day Four is the the creation of the heavenly lights. This is represented by the Jewish seven branched candlestick, the Menorah.  This stands for the sun, moon and five planets known at the time.

Day Five is the creation of animals and is represented by the Altar of Sacrifice where animals are offered.

Day Six is the creation of man and is represented by the person of the priest.

What is cool is that this symbolism carried over into our Catholic Church, and is evidenced at the new Our Lady of the Rosary very clearly.

Detail: having read Barker’s book  I recognized that even today the Catholics priest’s vestments are almost in the same four colors of the temple: White, Red, Purple and Green has taken the place of blue..so over the summer, when I was ordering new vestments I asked for the green chasubles to be made with a dark blue lining.

There is all this, and even more symbolism packed into our new church.

I’ll be giving tours of the church when we have an open house on Sunday, 15 January at 2pm (followed by a concert on the new pipe organ) and Sunday 22 January at 3.00.