Should Women Preach at Mass?

Should Women Preach at Mass? 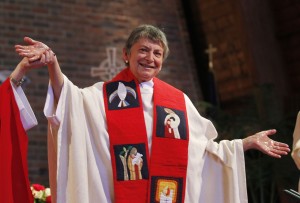 An essayist in L’Osservatore Romano– the Vatican paper–suggests that women should be allowed to preach at Mass.

I wholeheartedly agree. Not hearing women reflecting on the Gospels at Mass impoverishes us, limits us, and prevents us from hearing the wisdom and experience of fully half of our church. I am reminded of this every time I hear a woman reflect on her experiences of the New Testament–particularly on stories like the Annunciation, the Nativity, and all the interactions that Jesus ever had with women: with Mary Magdalene, with Martha and Mary, as well as with the woman at the well, the Syrophoenician woman, the woman caught in adultery, the woman with the flow of blood, and on and on. This is not to say that women cannot reflect on all the Scriptures–and on every single one of the stories in the Old and New Testaments–but we are especially impoverished by not having women reflect on stories that are about women in particular.

Of course the Scripture specifically forbids this. I Timothy 2:12 St Paul says, “I do not permit a woman to teach or to assume authority over a man; she must be quiet.”

Ouch. Not exactly what the feminists wanted to hear.

Which raises the interesting question of how this “difficult passage” should be interpreted. Shall we take it literally or is this one of those passages where we say, “That was then. This is now.” Lest we become too fundamentalist, all of us do this all the time, else we would not let our women have braided hair, wear gold jewelry or pearls…for St Paul also says in the same chapter, “I also want the women to dress modestly, with decency and propriety, adorning themselves, not with elaborate hairstyles or gold or pearls or expensive clothes…”

Considering the dress sense of most of the modern nuns I’ve met they are quite happy complying with the second of St Paul’s bits of advice while ignoring the first.

Seriously, should women be allowed to preach at Mass? Like most feminism, this seems wrong headed to me. Why should a person have something worthwhile to say simply because he is a man or she is a woman? Surely the question is not about their sex, but whether they have the theological and Biblical education, know how to teach or preach and can do it well. (Mind you–such criteria would exclude a good number of the ordained men I fear)

Should qualified women be allowed to teach the faith and “preach”? Sure. There is nothing stopping them.  Just not at Mass.

Fr Martin has a good point too. A woman probably does bring special insights to Biblical passages about women. It wouldn’t be a bad idea to hear those ideas. But not at Mass because preaching at Mass is reserved to the priest or deacon.

Could a woman be a good preacher? You bet.

Have you ever heard Johnette Benkovic speak? She’s a more powerful evangelist than most priests I know. Remember Mother Angelica in her heyday? She was one heckuva preacher. Mother Teresa packed a punch and so did all the great female saints. In our own day most of the CCD teachers are women. Most of the Directors of Religious Education are women.

So where did we get the idea that women are not allowed to preach and teach?

Sorry. This is just another sneaky ploy by weary old 1970s liberals to push the women’s ordination agenda.