Sixteen Signs of True Authority Every Catholic Should Learn

Sixteen Signs of True Authority Every Catholic Should Learn 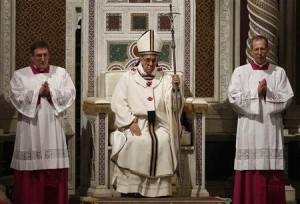 Pope Francis in the Cathedra of St John Lateran

Its easy to think they are all either man made religions or that they are simply the accident of certain historical and cultural conditions.

The question to ask when considering the validity of a religion is where its authority comes from.

If the main authority is an English king who wanted some loot and a new wife in the sixteenth century–ditto.

If the main authority is an Arab chieftain who had visions of angels and went on the warpath in the seventh century–it’s dodgy.

The authority you should be looking for would have to fulfill certain criteria.

This is the authority the Catholic Church has on offer:

There are fourteen things you would look for, which come in seven pairs.

This authority would be:

1. Historical – rooted in history and looking to history to advise on present day decisions. We’re talking 2,000 year old history, then back some through the Jews..

2. Contemporary – it is not ossified. It is able to be flexible and responsive to current needs. Here comes Papa on his own airplane talking about in vitro fertilization and same sex marriage

3. Universal – the authority transcends fashions and fads in time and place. Catholic Truth is well…Catholic.

4. Local – while it is universal, it can be found in real time applied at the local level. The Church is not just the Vatican–it’s St Hilda’s around the corner with Fr. Magee.

5. Objective – it is rooted in history, facts and discoverable truth, not opinion or subjective sentiment. Bye bye rubbery relativism.

6. Applicable -While objective it can be applied to subjective, personal needs. We can be flexible. There are some loopholes. The truth is not plastic but it is applied pastorally