Why Same Sex Marriage Is Impossible for Catholics

Why Same Sex Marriage Is Impossible for Catholics 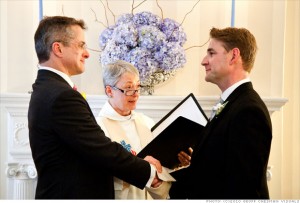 My article this week at the National Catholic Register explains the Catholic reasons why same sex marriage is an impossibility.

If we don’t allow same-sex weddings, we also don’t allow child brides, polygamy or remarriage after divorce for the same reason. We realize that others may disagree with our beliefs. We know members of other religions allow remarriage, child brides and polygamy. We also understand that other Christians and those with no belief may permit same-sex “marriage.” They may do so. We cannot stop them, but they should also realize that what their religion allows ours does not.

This doesn’t mean that we hate homosexuals, Muslims, Mormons, Episcopalians or atheists. It doesn’t mean that we are racist and bigots. We acknowledge that homosexual people may love one another. We can admit that if the law allows they may establish a civil union and live together. They may do as they please. They can even call what they do “marriage,” but that doesn’t make it marriage, and it certainly doesn’t make it a Catholic sacrament.