Something You Can’t Do in America

Something You Can’t Do in America 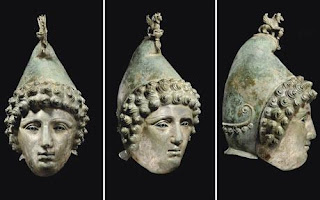 Here’s a pretty cool story: a geek with a metal detector found this fantastic helmet/mask in a field in Britain. Roman soldiers used to receive them as a medal of honor and excellence in horsemanship, and they would wear it in processions–brightly painted with streamers and with a bright colored uniform. Every year or so some Brit with a metal detector comes up with an amazing treasure.

Not something you can do in a field in Ohio. However, that being said, I can remember whenever it used to rain after a farmer had plowed a field in the farms around our house in Pennsylvania we’d see some old guy walking the furrows very slowly, hands behind his back, gazing down intently. He was looking for Indian arrowheads.

There’s something very masculine about this sort of past time, but I’m not sure what it is. Why do guys do stuff like metal detecting and arrowhead hunting or dressing up in civil war uniforms to re-enact the Battle of Gettysburg? For that matter, why do we hunt and fish and collect stamps and coins and build model railroads? Women’s past times are so much more practical aren’t they?