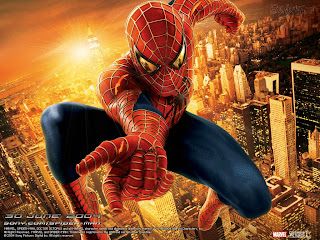 I’ve just finished watching a Spiderman movie with my oldest son, and while watching it, I began wondering why it is that America has produced the cultural phenomenon of the comic book superhero.

Of course, all the anti American cultural snobs can turn up their nose if they like, “So the comic book superhero is something to be proud of? What next? a song of praise for the Big Mac? cultural observations on the superiority of Wal-Mart as a retail model for the world?” I hear it, but let’s put the snobbery on one side for a moment.

I think America produces superheroes in popular culture for some very interesting reasons. First of all, the superhero is a modern version of the gods and heroes of the classical age. In the classical age the heroes had supernatural powers. They were half man and half god. They struggled with their destiny. With their supernatural power they had supernatural responsibility. They had to make tremendously difficult moral choices. As such, both the superheroes and the gods of the ancient pagan world revealed to mere mortals the depth of their own calling, the possibility that they too had a supernatural dimension to their lives, that this required great ressponsibility and engaging in difficult moral choices.

Having lived most of my life abroad, and traveled widely and come back to America, it strikes me that this is the most important distinction between Americans and the rest of the world. Americans are believers. They still buy into the great myth that there is a battle between good and evil, and that their own moral choices can make all the difference.

Are comic book superheroes an error in taste? Are they tacky and lower class in their spandex suits, their artificial anonymity, their over the top villains and their simplistic world view? Are they common, low brow and lacking in subtlety? Probably.