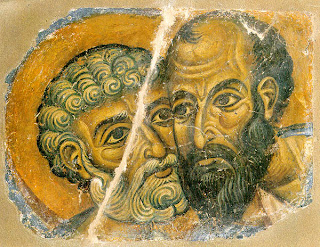 Peter the Fisherman. Paul the intellectual.
Peter the rough working class man who speaks from the heart. Paul the man who speaks from his head.
Peter the peasant. Paul the well connected, well educated Roman citizen.
Peter the humble believer. Paul the professional religious man.
Peter with the high school diploma. Paul who went to the Ivy League.
God chose them both, but he made Peter pre-eminent. He chose the simple man to be the Rock on which to build the Church.
Don’t forget that all you who read (or even write) too many books, who have too many theories, who have all the right answers, who spend too much time blogging.
PatheosDwight2007-06-29T17:16:00-04:00June 29th, 2007|Categories: Patheos|0 Comments