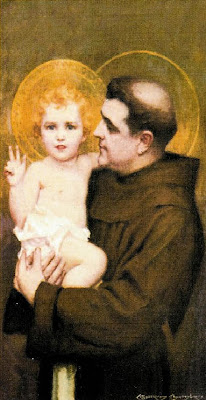 In the summer of 1987 I made a pilgrimage from England to Jerusalem hitch-hiking and staying in monasteries and whatever hospitality the road gave me.

By mid-June I was traveling through central France, and I was invited to stay with a friend of a friend. They were a well off Catholic family. They took me sight seeing, and as I got to know them I learned that their teen aged son had to leave school because he was suffering from mental illness.
It was St Anthony’s day, and realizing he was the patron of lost things I just said sort of off the top of my head to the French woman, “You know, your son has lost his mind. St Anthony is the patron of lost things. Maybe if you prayed to him your son would find his mind again.”
I felt pretty embarrassed saying such a thing (as I always do) but she smiled and said, “Yes, maybe so.” I went on my way, and there was a letter waiting for me at the monastery in Rome where I stayed.
It was from the French woman. She prayed a novena to St Anthony and her son got better.
PatheosDwight2009-06-13T11:03:00-04:00June 13th, 2009|Categories: Patheos|0 Comments