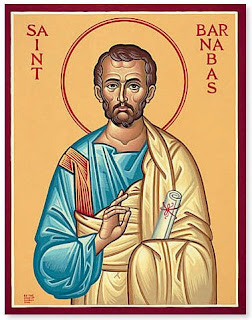 St Barnabas is the unofficial patron of convert clergy. (Along with famous convert clergy like St Cuthbert Mayne, St Edmund Campion, Cardinal Newman) You may remember that St Barnabas was the one who saw the new convert Saul as an asset, not a threat. Led by the Holy Spirit, Barnabas trusted Saul and realized his great potential for the church.

Convert clergy have many problems when they decide to leave their ministry, their church, their people in order to become Catholic. Not only do many of them leave their livelihood and launch out in faith to join the Catholic Church, but they do so with great courage and sacrifice, not knowing what lies ahead.

Very often they are given a warm welcome by Catholic bishops, clergy and people. But not always. They are suspected of being disloyal, or of being religious vagabonds–flitting from one denomination to another and never being satisfied. Some Catholics never take the time to actually sit down and talk with the convert clergy to find out why they converted. Instead they are treated as somewhat dangerous strangers in a family home. Some Catholic priests and bishops suspect the converts of being dangerous conservatives. Others fear that they are going to be the thin edge of the wedge to bring in married clergy across the board.

Many convert clergy are well educated, sometimes better educated than the Catholic clergy and sometimes better educated and more accomplished than the bishops themselves. They are often articulate and gifted men with vast pastoral and professional experience. I don’t like to admit it, but it is sometimes true therefore that the rather less gifted Catholic clergy and bishops regard the convert clergy as a threat.

If they do not regard them as a threat, at least they haven’t any idea what to do with them. Some Catholic bishops find it rather hard to think outside the box. They are used to priests coming to them from certain channels within the church. What do they do with a man in his forties or fifties with a PhD from a prestigious school, with professional qualifications in counselling, twenty years pastoral experience who may also have authored a couple of books and is fairly high profile? A man like that can’t be put into a senior position because he is a new Catholic, but can he simply be placed in a junior position? If a man with those qualifications turns up in a parish as a parochial vicar won’t there be trouble?

Then there is the real problem that not all the convert clergy are actually quite so eminent or qualified. Because the Anglican Church is now so fragmented and diffuse it is very difficult to assume that anyone who calls himself an Anglican priest is necessarily well qualified, experienced, Christian or for that matter even sane. A man in a dog collar may turn up with his card printed in Ye Olde English typeface calling himself Fr. Jones the Rector of St Andrew’s Anglican Church, and it might turn out that he’s a former independent charismatic Evangelical who went to Upinthehills Bible College for two years, got a taste for things liturgical then started his own Anglican Church in his garage.

For that matter, an Episcopalian or Anglican might come along and his formation (if it was only in mainstream Anglican and Episcopal seminaries) might be so radically influenced by modern criticism, relativism, feminism and homosexualism that he’s even less of a likely candidate than Fr.Jones the garage Anglican.

Another obstacle for convert clergy who wish to be ordained as Catholic priests is the bizarre attitude most of the Catholic leadership have about how much their clergy are paid. I heard the pastor of a large parish once complain that he gets paid, ‘the same amount as a burger flipper at McDonald’s’. He seemed to miss the fact that he gets his house, his car, his cell phone, his utilities, a food allowance and virtually everything paid by the parish. His ‘salary’ is really pocket money. I’ve heard Catholic bishops say, “I could never afford to support a married man and his family!” But if they simply provided the same thing that most parish priests at even moderately sized parishes receive most married men with families would jump at the chance.

I sat down recently with one of the celibate priests and we added up how much his benefits in kind were worth. How much for the house? How much for the car? How much for the utilities? How much for this and that and everything else. I won’t divulge the magic number, but his annual income was pleeeenty. From a practical point of view, any married man would be more than happy to have that income, combined with a job for life and the other benefits of the Catholic clergy.

Please don’t misunderstand, I am not knocking the fact that our clergy are well looked after, and I am not reducing the question of married former Protestant clergy being ordained to just financial matters. There are many more things involved in the whole equation, but the idea that parishes could not support a married man is simply preposterous.

The last question is whether the laypeople and clergy would welcome more married former Protestant pastors. The overwhelming response that I have heard is a resounding ‘Yes!’ I have had virtually zero negative responses to my ministry as a married man among laypeople, and have had a very warm welcome from my brother priests who are celibate.

Even if money was an issue, if a Catholic bishop went to most Catholic parishes and said, “Well, I don’t really have a priest for you. You’re going to have to share with the parish next door. However, I do have this married former Anglican. He has a wife and six kids. I could ordain him for your parish, but you’d all have to pitch in an extra ten bucks a week.” You bet most Catholics would say, “Ordain him now! We’ll pay twenty bucks a week!”

Why am I writing all this? Not because I want to flood the church with convert clergy priests, but because we have a priest shortage and there are more and more clergy from the Protestant Churches who want to convert, and want to minister in the Catholic Church. Are some of them unsuitable? Of course. Some cradle Catholics who want to be priests are unsuitable. So we pick through carefully and ordain those who are suited, trained, experienced and ready to go. Those who need more training we prepare for Catholic ministry. Worried about money? Forget about it. The parishes will support them. The men themselves often know how to support their family. Their wives work. They’re longing to serve the church and have already stepped out in faith. We need to honor that faith and respond with generosity, trust and open arms.

I make this plea on St Barnabas Day because I think it is what St Barnabas would do. Remember how the church was suspicious and afraid of the new convert Saul? His presence overwhelmed them, but Barnabas opened the door with trust, a positive attitude and a warm welcome.

He did so because he was ‘a good man and full of the Holy Spirit.’