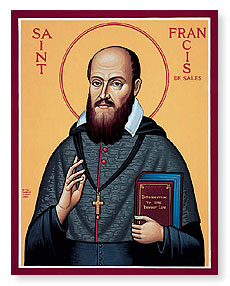 In fact, all true and living devotion presupposes the love of God;—and indeed it is neither more nor less than a very real love of God, though not always of the same kind; for that Love one while shining on the soul we call grace, which makes us acceptable to His Divine Majesty…The ostrich never flies,—the hen rises with difficulty, and achieves but a brief and rare flight, but the eagle, the dove, and the shallow, are continually on the wing, and soar high;—even so sinners do not rise towards God, for all their movements are earthly and earthbound. Well-meaning people, who have not as yet attained a true devotion, attempt a manner of flight by means of their good actions, but rarely, slowly and heavily; while really devout men rise up to God frequently, and with a swift and soaring wing. In short, devotion is simply a spiritual activity and liveliness by means of which Divine Love works in us, and causes us to work briskly and lovingly…The difference between love and devotion is justthat which exists between fire and flame;—love being a spiritual fire which becomes devotion when it is fanned into a flame;—and what devotion adds to the fire of love is that flame which makes it eager, energetic and diligent, not merely in obeying God’s Commandments, but in fulfilling His Divine Counsels and inspirations.