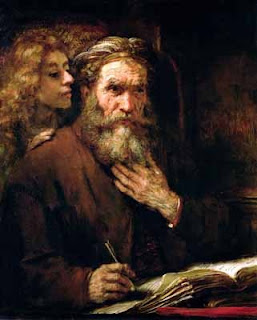 I am certainly sorry not to have been blogging very much recently, but on Friday I travelled to Vandalia, Illinois to conduct a retreat on Healing the Family Tree (more on that intriguing subject shortly when I have the time) with my friend John LaBriola. I first met John at EWTN when he and I were both there to film some shows at the same time. Then we met up again quite by chance to lead a retreat in Vandalia in July, and now again in September. John’s written a book called Onward Catholic Soldiers on spiritual warfare.

Then, I no sooner got back from Illinois on Sunday and had a short breather before I was up to bat leading the sixth grade retreat yesterday. This means I didn’t get to post on St Matthew. What was nice about the feast of St Matthew yesterday was that I celebrated Mass with our beautiful sixth graders at St Joseph’s Catholic School. The gospel is all about Christ calling sinners, and it seemed to me that Jesus Christ really only calls two categories of people: sinners and children. So as I read the gospel about Jesus calling sinners to the sixth graders I thought that he also calls children.
Really, that means no self righteous people and no grown ups are allowed in the kingdom, and when you think about it, isn’t the essence of being ‘grown up’ being self righteous to a certain extent? What I cannot understand about adults’ relationship with children is how often the adults become self righteous know it alls. How annoying and arrogant is that? Their being ‘grown up’ so often means they forget what it means to be a child. They put so many restraints on children and are so strict and so demanding. I feel sorry for our kids.
Of course, while we have to be children to enter the kingdom, we’re not supposed to stay as children. We’re expected to grow up to the full humanity of Jesus Christ as St Paul says in Ephesians, and this is what I love about St Matthew. He actually becomes as a little child to receive Jesus. He leaves all that grown up stuff about taxes and soldiers and politics and money and leaves it all behind and in a child like gesture of abandonment gets up to follow Christ.
Sometimes at school I’m blamed for ‘liking the bad kids’. Maybe I do take the good kids for granted, and maybe my critics are right. I do like the kids who have troubles. There’s something real about them, something needy. I see that they are sinners and children both and maybe therefore, (if they have open hearts) they’re a step closer to the kingdom than all of us religious and righteous ones.
PatheosDwight2009-09-22T17:46:00-04:00September 22nd, 2009|Categories: Patheos|0 Comments