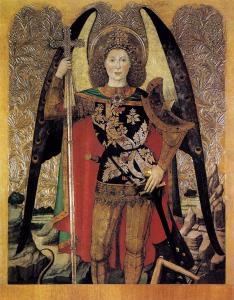 This is my favorite time of the year. Not only is the beginning of Autumn the most beautiful season, but I love this ten days in the church calendar: St Michael, St Jerome, St Therese, St Francis, St Faustina, Our Lady of the Rosary.

Overdose of the Holy Ghost.

Now to St Michael: Here’s one of the reasons I love the angels: because just by the existence of this feast in the church calendar we knock a couple of deadly modernist heresies on the head.

I’m thinking of that three headed hound from hell, and Cerberus’ three heads are Materialism, Scientism and Symbolist Reductionism.

Let me explain: The angels are God’s invisible messengers. They speed to do his will and are real, but usually not visible to us. By affirming their existence we also affirm the reality of the whole invisible realm, and by doing this we acknowledge the reality of the interchange between this physical world and the spiritual realm. We also affirm that this is really what religion is all about.

I say all that to say this: the three headed hound would have us believe that there is no “other world” its all pretend. It’s make believe and angels are in the same category as the good fairy, Tinkerbell and leprechauns.

Scientism is the heresy that teaches that the only form of knowledge which is valid is that which is proven through scientific research. In other words, if you don’t have the scientific data–fuhgeddaboudit. This regularly surfaces as atheists asking for “evidence” for the existence of God.

Materialism is not simply going to the Mall to shop until you drop. Materialism is the belief that there is nothing more than this physical realm. What you see is what you get. There is no heaven, no hell, no angels, no demons, no miracles and if there is a God he is asleep on a cloud somewhere and is never involved in this physical world.

The third heresy is the most insidious and the one you find in modernist church circles. For want of a better name I call it “symbolist reductionism”–which is a fancy way of saying a person reduces a real supernatural concept to a mere symbol. This theological sleight of hand enables modern churchmen to say they believe in angels, but what they don’t tell you is that they only believe in them as symbols. So when pressed they might say, “Oh yes. Angels! Wonderful! St Michael is such a powerful image of the triumph of good over evil.” Or they might say, “Angels! What inspiring agents of all that is beautiful, spiritual and true!”

So for my money, bring on St Michael, the hammer of heresies and let us celebrate all that is seen and unseen.