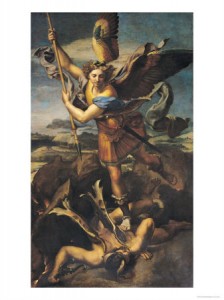 My latest article at Those Catholic Men website discusses the right approach to spiritual warfare.

I had to speak with Tom about his passion for spiritual warfare. His zeal was unquestioned, and his desire to fight the good fight was admirable. He had his warrior’s rosary, his prayer book, his holy water and his scapulas all in place. He was ready to take up his weapons and fight against the world, the flesh, and the devil with all his might.

I had another worry. Tom’s passion to pray against the world, the flesh, and the devil had a sub current of anger. Was it possible that Tom was projecting some of the turbulent lusts, frustrations, and rage within himself outward onto other perceived evil people, evil politicians, and even members of other religions and racial groups? Wrestling with the devil is like wrestling with an octopus in oil. It’s a slippery business. The devil is the father of lies and there is nothing he likes better than deceiving us and drawing us into the most cunning of spiritual traps. Tom was in danger of wasting time in “spiritual warfare” doing no more than wrestling with evils of his own imaginings.