Should Catholics Apologize to Protestants?

Should Catholics Apologize to Protestants? 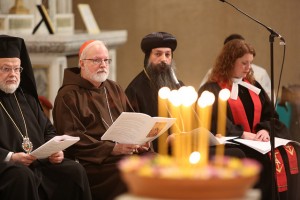 Week of Prayer for Christian Unity

In his homily on the annual ecumenical Vespers to close the Week of Prayer for Christian Unity at St Paul’s Outside the Walls, Pope Francis apologized for the wrongs committed by Catholics against other Christians.

Speaking as Bishop of Rome and leader of the Catholic Church, Pope Francis asked for mercy and forgiveness on account of the “non-evangelical” behavior on the part of Catholics toward their separated brethren.

He also called on Catholics to forgive wrongs done to them by other Christians.

This echoes the formal apologies led by Pope St John Paul II on Ash Wednesday of the Jubilee Year 2000 in St Peter’s basilica.

Should a pope, or for that matter, should any Catholic apologize to Protestants for the persecutions of the past? First it should be made clear that the pope is not apologizing for the Catholic Church or for the eternal claims of the Catholic Church. He’s taking responsibility for the actions of individual Catholics down the ages who persecuted their non Catholic brothers and sisters.

Even so, is this a legitimate thing to do? Can one person apologize for the sins of another?

Yes. It’s a perfectly good and decent thing to do, and it was a magnificent step forward when Pope St John Paul II did this in 2000, and it is wonderful to see Pope Francis follow in his footsteps. It is possible to express regret and sorrow over the sins of the past because we are one body and often the sins committed by individual Catholics were done in the name of their religion.

Were crimes committed against Protestants by Catholics? You bet. Check out the St Bartholomew’s Day Massacre Should Catholics be horrified and ashamed of what happened in the name of their religion? Of course. Should the Pope, as head of the church admit these wrongs and seek forgiveness? Absolutely.

After all, seeking forgiveness and saying “Sorry” is the foundation stone of the Christian faith.