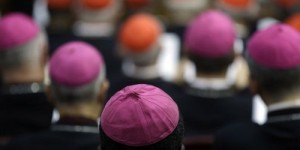 Thomas D Williams gives an update here on the synod as the final report is about to be released.

He doesn’t have much time for Jesuit priest Thomas Reese

Though the synod was convened to discuss the many issues facing Christian families in the world today, Reese and his cohort had a considerably more narrow focus: Communion for the divorced and remarried and a softening of the Church’s condemnation of homosexual sex.

The “success” of the synod would be the degree to which these two objectives were reached.

As Reese himself wrote on Oct. 20: “The bishops appear oblivious to the fact that, at least in the West, the success of the synod will be judged by whether there is an opening to Communion for divorced and remarried Catholics.”

The irony behind Reese’s hubris in attempting to speak for the entire “West” is unfortunately lost on a man whose gauge of the western mind is limited to whatever the New York Times and the Washington Post are spouting.

I couldn’t agree more. It irritates me no end to hear the “Kennedy Catholics” in America continuing to assume that they speak not only for all American Catholics but for all Catholics everywhere. Because they have good contacts with politicians and other East Coast establishment figures they think they’re on top of the world. Yucch.

Meanwhile, Robert Royal backtracks some of his early pessimism here as it turns out the synod was Catholic and not Anglican after all.

It’s very rarely pleasant to have to issue a self-correction, but I’m quite happy to do so today, especially since the error was to underestimate the workings of the Holy Spirit – and even of a Synod of Bishops. I’ve been a bit more optimistic than most observers here in Rome over these past weeks (as you may have noticed), and readers have chided me for everything from criminal naiveté to having drunk deep of the synodal Kool-Aid. But though I have not yet personally seen a copy of the Final Synod Report, those who have, and whom I trust, are, in two words, pretty happy. So my judgment that the best we could hope for was damage control, but no more, was actually a little too pessimistic.

So good news for now, and we will take the day off Sunday from these Synod Reports so that we can give you a final wrap-up on Monday based on the definitive final text. But perhaps one of the strongest signs of all that you may see in the next few days would be something that several Synod Fathers will be proposing today: that the Final Report begin and end with the words “Jesus Christ.” If that is inserted into the final text, we will have a very signal achievement indeed.

I have not followed the synod closely because I suspected most of the ink being spilled was based on gossip, negativities, false assumptions and bad spirit. I personally felt confident for the most part that the synod fathers would uphold the faith while still looking for ways to assist those whose heart and homes and families are broken.