Why Do You Want to Receive Communion Anyway?

Why Do You Want to Receive Communion Anyway? 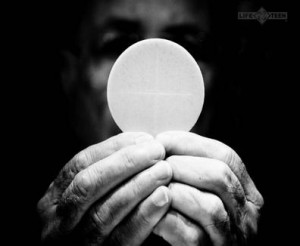 Far be it from me to pontificate about the vexed questions the synod fathers are debating, but I have been pondering a few of the questions and have to admit to being stumped.

The question is this: “Should divorced and remarried Catholics and publicly active homosexuals be admitted to communion?”

The discipline of the church says, “No.”

There are several reasons for this. First of all, St Paul warns in 1 Corinthians 11 that a person should not “eat and drink unworthily”. The church has defined this specifically saying that if a person knows or believes themselves to be in a state of mortal sin they should not receive the body and blood of Christ lest, as St Paul goes on to warn, “they eat and drink damnation unto themselves.” St Paul says they are “sinning against the body and blood of the Lord.” (v.27)

The problem is, it is often difficult to know if one is in a state of mortal sin. That’s why the good catechist says, “If you are in any doubt about it. Don’t receive the body and blood of the Lord. Go to confession first.”

While it is often difficult to know if a person is in mortal sin, there are some circumstances where the sin is formal and public. In other words, the person has sinned openly and publicly and if they receive communion unworthily they not only sin agains the body and blood of the Lord, but they also sin against the church by causing scandal to others.

There are very few situations where this is the case, but I can think of two which are now up for discussion. The first is the case where a person is divorced and remarried. No matter what the circumstances and intentions there is an objective, formal and public act of mortal sin. It’s as objective as divorce papers, a new marriage license and publicly living together as man and wife. While we can admit that circumstances and intentions might mitigate the person’s culpability, the objective, public mortal sin is right there staring everyone in the face. There is no getting around it.

The second case is that of a homosexual person who publicly enters into a “marriage” with another person of the same sex. Like the divorced and remarried person the mortal sin is objective, formal and public. There is no getting around it. It’s there as big as day.

My question therefore to people in this situation is, “Why would you want to receive communion anyway?” Continue Reading