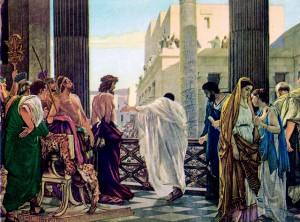 I’ve just finished a book I had been wanting to read for some time,The Rise of Christianity: How the Obscure, Marginal Jesus Movement Became the Dominant Religious Force in the Western World in a Few Centuries

Stark is a sociologist and with years of research and a sociologist’s tools he asks how a tiny Jewish sect following an executed criminal could possibly have dominated the pagan Roman Empire in just three hundred years. How is it that a rag tag band of disciples could organize a movement that grew so quickly and spread so widely that by the mid 300s it had become the state religion of the Roman Empire?

The different factors that Stark brings together are fascinating. They upset some of the widely held assumptions and show the Christian movement in a completely new light. Here are ten reasons why the Christian church conquered Caesar.

1. Conversions happen through social networks – Stark shows from studies of how religious conversions happen that conversion most often and most effectively takes place through existing relationships. Preaching to strangers doesn’t do much good. Knocking on doors doesn’t do much good. Discussing the faith and living the faith with family members and friends brings those family members and friends into the new religion. The Roman Empire was vast, fluid, multi cultural and diverse. Individuals were alienated and alone. The Christian Church was based in community and belonging. It was therefore very welcoming for persons and families who had washed up in the cities with no support groups or friends. Other than ethnic. political and racial ties there were few other organizations or groups that offered friendship and belonging.

2. The First Christians Were Not All Slaves – Many people follow the established view that Christianity was a religion for slaves, outcasts and immigrants. Stark argues strongly from his own work in studying the growth of new religions that a good number of the first Christians were solid middle and upper class citizens. He does so because the educated classes were the ones who were skeptical of the old pagan religions and more likely to adopt a new faith. He also points out that the persecution in the early church was not really as extensive and draconian as we are often led to believe. If the Christian church had been the movement of workers, slaves and immigrants it would have been perceived as much more of a threat. The fact that educated, middle class and wealthy people belonged gave the early church the credibility, organizational know how and material resources to prosper.

3. Many Christians Were From a Jewish Background – It is traditional to think that the mission to the Jews failed and very soon the early church was mostly Gentile. Stark studies the situation of the Jews who were dispersed from Israel and argues that many of them would have been open to a reformed version of their religion that provided a strong link with their religion while also being adapted and conformable to the non-Jewish world in which they lived. Studying the responses of Jews throughout history in similar situations he argues that a good number of the early Christians were converts from Judaism. This provided the early church with a strong network across the Empire of existing families and communities into which the early Christian movement could be established.

4 Epidemics Affected the Witness of the Church – Most historians overlook the effect of natural disasters on history. Stark brings to light two terrible plagues which struck the Roman Empire in 165 and 251. Populations were decimated and the demographics of the empire were overturned. Stark shows how the Christians survived the epidemics better than most because they had a caring community involved in medical care. Furthermore, the Christians did not flee in the face of the unmitigated disaster. They stayed and helped the sick and dying even if they got the disease and died themselves. This witness was a powerful attraction for many. The epidemics therefore had the combined effect of wiping out many pagans and adjusting the demographics in favor of the Christians. At the same time pagans were drawn to the loving care and heroic witness of the Christians. Christianity also gave meaning to what seemed mindless and absurd suffering. Continue Reading