Must I Bake That Gay Wedding Cake?

Must I Bake That Gay Wedding Cake? 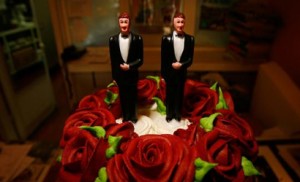 My latest article at CRUX is half of a debate on whether a baker, florist or judge must participate in a same sex wedding.

It’s one thing to uphold deeply held religious views when they are private. Private views are not subject to consistency, fairness or logic. But public, legally regulated behavior is.

The same goes for government workers — probate judges, county clerks, justices of the peace — who claim a religious exemption from having to do their job, in this case issuing civil marriage licenses to same-sex couples. When you work at the county clerk’s office, you get paid to do a job, not run a missionary campaign.

She says the religious dissenters should put up and shut up.
I say they have the right to both voice their dissent and act on it.

A further principle of religious freedom is that no one should be forced  to violate their conscience and religious convictions. Christian medical staff can opt out of abortion procedures even though they are legal. Catholic doctors are free to counsel their patients to use natural family planning and avoid artificial contraception. Religious institutions are exempt from some aspects of employment law that might stomp on their religious toes, and Christian employers are not forced to pay for medical procedures and technologies that violate their conscience…
If we follow these existing principles, then it would follow that an American citizen has every right to opt out of providing a service that would violate his conscience, or he may devise a way to do his job without violating his principles. So a Muslim should be able to either opt out of making ham sandwiches or devise a way to serve a ham hoagie in a way that does not violate his religion.