Ten Encouraging Things to Remember About the Pope

Ten Encouraging Things to Remember About the Pope 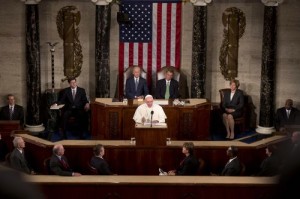 Here are ten things to remember about a papal visit which should help put things in perspective.

1. In Congress, at the White House and at the UN the Pope is speaking as a Head of State – Remember that the Pope is not only the pastor and papa to all Catholics. He is also a head of state. Therefore when he visited the White House, addressed the US Congress and spoke to the United Nations he is doing so as head of state. His talks are therefore diplomatic speeches. They are designed to meet his audience where they are, find connecting points, build bridges and speak to matters of shared concern in the realm of politics, economics and culture.

2. The Pope is a World Religious Leader – He not only has the hearts and minds of the world’s Catholics–he also has the attention of the whole world as the single global religious leader. Consequently he has an obligation to connect with people of all religions as much as possible. This means it is appropriate for him to participate in inter faith gatherings. He’s the Catholic pope–but Catholics affirm the beauty truth and goodness that can be found in all religions, while also seeking to correct what is in error and draw devotees of those religions further into an encounter with Christ the Lord.

3. The Pope Speaks in Generalities for a Reason – It might be that you wanted the Holy Father to speak in more specifics about your particular pet peeve or project. The problem with this is the same problem anybody making a speech has when he starts to thank people. You invariably offend someone by leaving this person or that person out of your list. You forget something specific or you get things in the wrong order or what someone else perceives as the wrong priority. Dealing in generalities the pope can connect with more people and avoid the problems associated with being specific.

4. The Right Words for the Right Audience – Notice that the pope’s speeches were tailored for his different audiences. He spoke to priests and religious about their shared joys and sorrows, duties and responsibilities. He spoke to the bishops about their role as shepherds of  the people. He spoke at the White House, Congress and the UN about the responsibilities of lawmakers and politicians. The question of capital punishment, for example, was an appropriate topic for lawmakers and judges. No doubt when he gets to Philadelphia he will speak more to the issues of abortion and marriage because he is speaking at the World Meeting of Families.

5. The Pope Speaks Through Symbolic Gesture Pope Francis balances the papacy of Benedict XVI beautifully. Pope Benedict was a man of ideas, words and clear teaching through the written and spoken word. Francis’ forte is the significant gesture and action. We should therefore pay close attention to his actions and choices–from the little car he has chosen, to his spontaneous visits with the poor, with Catholic sisters, with children and with families. He wants to show us the gospel as well as preach the gospel. If St Francis did say, “Preach the gospel always–use words if necessary” the Pope Francis lives that out.