On John Boehner’s Tears and Mine

On John Boehner’s Tears and Mine 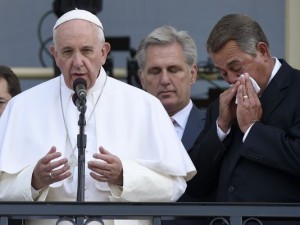 For me here is the best moment of the Pope’s visit so far.

The man has given a speech to thousands at the White House. The next day he gives a historic speech to both houses of Congress with the Supreme Court Justices in the front row.

Then he comes out on the balcony of the Capitol to see hundred of thousands of cheering people.

He puts his arm around Boehner and says, “Pray for me.”

Now that was a gospel moment. Catch a video of this here (at around 9:43)

He’s meeting and speaking with the richest and most powerful people on the planet and then he lights up and points out that the children are the most important.

Remember the gospel? Do you remember it? It was just when the disciples were arguing about places of power and debating who was the most important that Jesus  takes a child in his arms and says, “Unless you become like a little child you cannot enter the kingdom. The greatest among you will be the servant of all.”

No wonder John Boehner, standing at his side, wept.

It puts into perspective the mockery that Boehner gets for weeping.

So what if he cried? Do you think he wanted to lose control when he knew the eyes of the world were on him?

He has heart, and if you don’t have some heart in your religion what have you got?

If you don’t have what the Eastern Orthodox call “the gift of tears” from time to time what good is your religion?

Good for him, dammit!

I’m glad the children were there in the front row. If anybody has a pro life heart and pro life eyes they saw the pro life message loud and clear.

Then Boehner the next day resigns. He steps down from his position of power.

I’ll be very interested to see what he does next.

I hope it is something for the children.

I hope it is with tears.