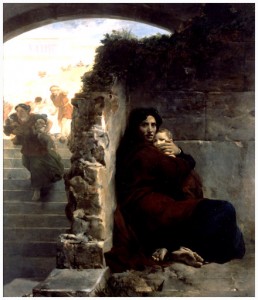 Slaughter of the Innocents – Leon Cogniet

Invariably the Memorial of Holy Innocents gets swamped with post-Christmas celebrations. We’ve got a house to clean up, kids to amuse, relatives to visit, gifts to return AND most of us are supposed to get back to work.

Priests usually take a few days off. At our parish the office is closed this week and Father is maintaining a skeleton service of the sacraments.

Its a shame because this Memorial of the Holy Innocents is more important than ever.

We remember the slaughter of babies by Herod the (not so) Great. The children of Judea were slaughtered because they were a perceived threat to Herod. They were the victims of his violence, greed and lust. They were victims of his lunacy–his egomania, paranoia and delusions of grandeur.

As we keep the memorial it is worth remembering the Holy Innocents in our world today who are victims of the many mini-heroes of our day.

Here are ten categories of the Holy Innocents today. Pray for them and remember them in today’s continued battle against the forces of darkness.

As there are ten, remember them as you say a decade of the rosary today.

My latest book, Praying the Rosary for Spiritual Warfare follows this pattern of using the rosary to pray against the terrible evil in our world today. Go here to learn more.