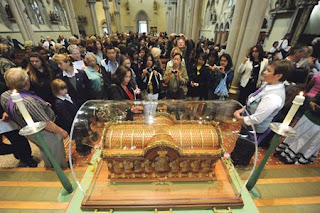 The relics of St Therese have now visited over 42 different countries and wherever they are taken thousands and thousands of people turn up to honor her. She is on a 28 day tour of England at the moment, and in that sadly secular country the sight of tens of thousands of people thronging her casket is somewhat of an embarrassment. The phenomenon is reported in the Catholic Herald here and the BBC reports here with some footage.

What are we to make of the extraordinary influence of the relics of this young girl? First, it is interesting how much she foresaw. She predicted that her body would not be corrupt so that her relics might be venerated. Nevertheless, when her coffin was opened the crowds reported supernatural fragrance of roses. When I lived in England I met a woman who’s mother was present at the exhumation and who testified to this phenomenon.

There is more to it however. Therese also said on her deathbed that she believed God had granted all her desires. Well, one of her most fervent desires was to be a missionary. She longed to travel to every country of the earth singing the praises of God and proclaiming his mercy to the nations. In God’s strange providence we see this desire coming true through the regular pilgrimages of her relics around the world. They say ‘if stones could speak’. They might as well say, ‘if bones could speak’ for in this young girl they do.

There is more to it however. Mother Teresa took her name in religion from Therese–not from Teresa of Avila. Therefore, the missionary desire of Therese was brought to fulfillment in the little nun from Albania and her order: Missionaries of Charity. Not only does the title of this famous order refer to ‘charity’ as ‘charitable work’ but it also refers to the greater theological virtue of charity, and this too references back to Therese.

In probably the most famous passage of her writings she says,

Since my longing for martyrdom was powerful and unsettling, I turned to the epistles of St. Paul in the hope of finally finding an answer. By chance the 12th and 13th chapters of the 1st epistle to the Corinthians caught my attention…When I had looked upon the mystical body of the Church, I recognised myself in none of the members which St. Paul described, and what is more, I desired to distinguish myself more favourably within the whole body. Love appeared to me to be the hinge for my vocation…I knew that the Church had a heart and that such a heart appeared to be aflame with love. I knew that one love drove the members of the Church to action, that if this love were extinguished, the apostles would have proclaimed the Gospel no longer, the martyrs would have shed their blood no more. I saw and realised that love sets off the bounds of all vocations, that love is everything, that this same love embraces every time and every place. In one word, that love is everlasting. Then, nearly ecstatic with the supreme joy in my soul, I proclaimed: O Jesus, my love, at last I have found my calling: my call is love.

So Therese’s missionary vocation is fulfilled in the Missionaries of Charity, for not only did Mother Teresa take her name from Therese, all her sisters are formed in Theresian spirituality.

Those secular critics of the pilgrimage of the relics only humiliate themselves publicly by insulting something greater than themselves. All they do is reveal their ignorance, their vulgarity and their blindness of soul.

Finally, a word of my own witness. I first met Therese when I was on my pilgrimage to Jerusalem in 1987. By chance I went to Lisieux. I was an Anglican priest and knew virtually nothing about her and what I did know did not impress. Then that summer evening in the Hermitage next to the Carmel where she lived in woke up at three in the morning. I was wide awake and felt a ‘presence’ in my room–a female presence. I felt it was her. The next morning I bought a copy of her autobiography and learned more about her. I remember saying a prayer as I walked along, “Therese, I am not a full member of your family, but I read here that you pray for priests. I pray that you will pray for me too, and perhaps one day I will be one of your priests.” Just under twenty years later, despite great obstacles, I was ordained a Catholic priest, and I am convinced that she played no small part in my own peculiar pilgrimage.

I will be saying Mass in just a few moments here at school, and as it is every year, my heart will be full of gratitude to this great saint.

PS: Check out my book St Benedict and St Therese…