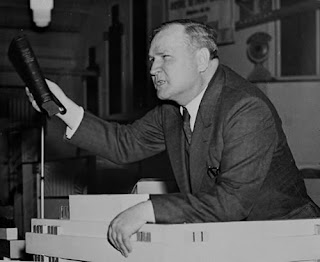 How well I remember the fundamentalist altar call. The preachers were clear: human beings were sinners separated from the love of God. Jesus died to forgive our sins. All we had to do was repent and believe the gospel. Then, “Every head bowed, every eye closed, nobody looking around.” The old hymn, “Just as I am without one plea…” was begun, and we were asked to put up our hands if we had prayed to accept Jesus into our hearts. Then, in Billy Graham’s memorable phrase we were asked to “get up out of our seats.” and come forward where we met a mature Christian and were led in a sinner’s prayer: a prayer of repentance and faith.

Coming back from hearing confessions last night I thought, “Is confession really so different?” In confession the Catholic ‘gets up out of his seat’ and goes to a public place to confess his sins. There he prays the sinner’s prayer, but we call it ‘an act of contrition.’ At the bottom line the confessional and the altar call are the same transaction between an individual and God: The sinner repents and accepts the forgiveness that Christ won on the cross.

But Catholicism is always ‘More Christianity’ not ‘mere Christianity. While the confessional holds within itself all that is good and honest and true about the altar call, there is more to it than that. First of all, the sinner gets the chance to confess specific sins and receive advice and counsel. This is a great help because, while the sinner may be aware of his sinful condition, he may not be too clear on the nature and depth and specificity of his sin. A good confessor helps him to see himself and to see God’s mercy more clearly.

Secondly, in Catholic confession the penitent is given a suitable penance. The penances are not too hard lest the penitent think that he is somehow earning his salvation. Instead, it is a devotional action that takes the person into a closer relationship with the forgiving Lord. It is also an action of restitution and responsibility. We have done something wrong. We actually want to do something positive to counter the negative action in our own lives.

Thirdly, the Catholic sacrament of confession is repeatable. Some Baptists ‘get saved’ every year at the summer revival meeting, and although it doesn’t click with their theology, the instinct is right. We sin and sin again. What we want to do we do not do and what we do not want to do we do. Confession recognizes the reality of the repetition of sin, and allows for continued repentance and repeated forgiveness…as the gospel says, ‘seventy times seven times’ or in other words–perfect and everlasting forgiveness.

Finally, the Catholic sacrament also offers the same apostolic forgiveness that Jesus passed to his apostles. The logic is simple: 1. Only God forgives sin 2. Jesus, God’s Son exercises divine forgiveness on earth 3. He grants his apostles the same power to forgive sins in his name 4. That power is passed on to the successors of the apostles until the end of time. In the Catholic confessional the penitent confesses his sins to Jesus Christ, and Jesus Christ (speaking through his Church and in particular through his priest) grants the penitent soul forgiveness.

To live in that open hearted and needy mentality toward God is the heart of the Christian Way, and for this gift I would gladly “get up out of my seat.”