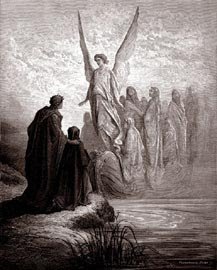 The angel pilot appears at the opening of Dante’s Purgatorio:

So that the white and the vermilion cheeks
Of beautiful Aurora, where I was,
By too great age were changing into orange.


We still were on the border of the sea,
Like people who are thinking of their road,
Who go in heart and with the body stay;


And lo! as when, upon the approach of morning,
Through the gross vapours Mars grows fiery red
Down in the West upon the ocean floor,


Appeared to me–may I again behold it!–
A light along the sea so swiftly coming,
Its motion by no flight of wing is equalled;


From which when I a little had withdrawn
Mine eyes, that I might question my Conductor,
Again I saw it brighter grown and larger.


Then on each side of it appeared to me
I knew not what of white, and underneath it
Little by little there came forth another.


My Master yet had uttered not a word
While the first whiteness into wings unfolded;
But when he clearly recognised the pilot,


He cried: “Make haste, make haste to bow the knee!
Behold the Angel of God! fold thou thy hands!
Henceforward shalt thou see such officers!