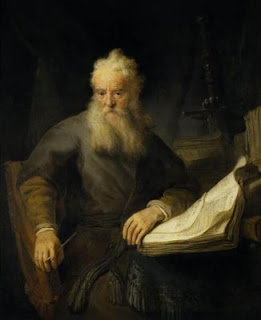 From today’s Office of Readings: with commentary by Fr Longenecker
Paul to the churches of Galatia, This is but one of Paul’s epistles. Notice that his authority is not rooted in any single church community, but is ‘Catholic’. He presumes to instruct the Galatians, but also the Romans, the Corinthians, the Christians at Thessolonica and Ephesus and beyond. and from all the brothers who are here with me, an apostle an ‘apostle’ is ‘one who is sent’. He is sent by Christ, who was himself sent with authority by the Father. Christ who said to his apostles, “As the Father has sent me, so I send you.” does not owe his authority to men or his appointment to any human being but who has been appointed by Jesus Christ and by God the Father who raised Jesus from the dead. So he affirms the apostolic authority, and that authority is by direct divine mandate. Furthermore, it is validated by the historical fact of the resurrection. “If Christ is not raised from the dead” St Paul says in Corinthians, “Our faith is in vain.” He might just as well say, “If Christ is not raised from the dead our apostolic authority is meaningless.” We wish you the grace and peace of God our Father and of the Lord Jesus Christ, who in order to rescue us from this present wicked world sacrificed himself for our sins, in accordance with the will of God our Father, to whom be glory for ever and ever. Amen. It is likely that this is a snippet from an existing liturgical formula. The primitive church was liturgical and hierarchical. Reject Protestant ideas that it was the equivalent of a home Bible study where they sang choruses, read the Bible and prayed extemporaneously.
I am astonished at the promptness with which you have turned away from the one who called you and have decided to follow a different version of the Good News. Paul had been preaching the gospel of freedom, but the Galatians had been seduced by legalistic former Jews who insisted that the new believers conform to all the rules of the Old Covenant–including circumcision. Legalism is always an easy way to be religious. Freedom is far more difficult. Legalism (like all easy forms of Christianity) is a false gospel. Beware. Not that there can be more than one Good News; it is merely that some troublemakers among you want to change the Good News of Christ; and let me warn you that if anyone preaches a version of the Good News different from the one we have already preached to you, whether it be ourselves or an angel from heaven, he is to be condemned.  Paul actually says the false teacher is cursed. Anathema sit. The apostolic church has always condemned both false teaching and false teachers. The language is strong here, and is echoed in the New Testament by Peter and by the gentler beloved disciple John. False teachers be damned!  A false religion preached from ‘an angel from heaven’? I can think of two: Islam and Mormonism. But he includes himself! If he teaches a false gospel he too is to be condemned. I am only repeating what we told you before: if anyone preaches a version of the Good News different from the one you have already heard, he is to be condemned. Have I said it before? I’ll say it again. False teachers are condemned. So now whom am I trying to please – man, or God? Would you say it is men’s approval I am looking for? If I still wanted that, I should not be what I am – a servant of Christ. The one who teaches with apostolic authority cannot please men. What does this mean? It means there are essentially two ways: the way of the world and the way of the gospel. The way of the world is man-pleasing. The false teacher who conforms to the world and compromises and pleases those with money and power and prestige–they are the false teachers. This is the most subtle of lies: the Catholicism that conforms outwardly, but lives according to one motivating force: money and worldly success and worldly approval. The one who serves Christ, however, will be shunned and rejected by the world–and shunned and rejected most of all by those who seem to be his brothers in Christ, but who have conformed to the way of the world.
The fact is, brothers, and I want you to realise this, the Good News I preached is not a human message that I was given by men, it is something I learnt only through a revelation of Jesus Christ. He can only be true to the message he has received, and it was the message from Christ Jesus himself. The gospel is not a human fabrication. Neither is the apostolic church founded by St Paul and St Peter. Do not be deceived by bad Catholics and Protestants who say that the dogmas and moral teachings of the Catholic Church are “just man made rules.”  The Catholic faith is not man-made. Man made religions always conform to the way of the world. The Catholic faith–the gospel of Christ always subverts the way of the world. That is because it is not of this world.
Here endeth the Sunday evening Bible study by Pastor Longenecker…
PatheosDwight2012-02-05T16:53:00-04:00February 5th, 2012|Categories: Patheos|0 Comments