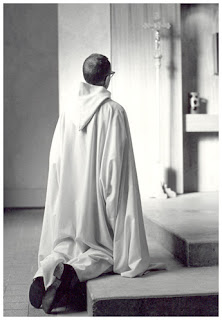 Conversion of Life is the wild-eyed and grace filled, unpredictable part of the spiritual way. Conversion of life means ‘change of life’ and real change entails risk, uncertainty and the adventure of going into the unknown. In the spiritual life it means accepting the work of the Holy Spirit–who may be doing things his way not our way. It means being open to the new and unfamiliar aspects of the faith, and being alert to all the wonderful ways that God may want to bring us to the fullness of our faith.
Conversion of Life in the Benedictine way is not an event, but a condition. Those who seek conversion of life are looking for it to take place in every moment of every day, and in every aspect of our lives. Each day we wait with Elijah in the cave–listening for the voice of God in the earthquake wind and fire–and finding it in the still small voice. Every day we look for the new and exciting, the strange and disturbing way of God in our little lives.
Those who seek conversion of life without the other two vows of stability and obedience will be ‘tossed about by every wind of doctrine.’ Stability and obedience provide a rock to build on and a star to steer by. Only with the other two can conversion of life really take place authentically and positively and certainly. Without them, how can we be sure that conversion of life is not really just our latest religious whim, the latest spiritual gimmick or the latest liturgical fad? Stability and obedience create the atmosphere for conversion of life to take place.
Benedict called the monastery a ‘school for the Lord’s service.’ Like any school, obedience and stability are necessary for education and growth to take place. In the monastery the education is an education in the ways of the spirit, and the growth is growth into ‘the likeness of the full humanity of Jesus Christ.”
PatheosDwight2007-07-09T18:41:00-04:00July 9th, 2007|Categories: Patheos|3 Comments