The Call from Hollywood!

The Call from Hollywood! 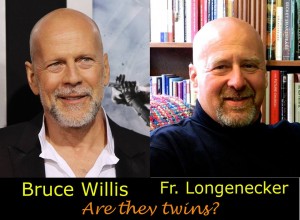 After I left the Anglican church I trained as a screenwriter and part of the patter in the class was, “You get yourself out there. You connect and network. Then out of the blue you get the call from Hollywood. When the call comes you better be prepared to get up and go!”

Yesterday I had the call from Hollywood. I was interviewing award winning actress Roma Downey about her new television series A.D. for an article I’m writing and I happened to mention my name and joked about my resemblance to a certain well known film star.

She said, “I know Bruce! He lives around the corner from me, and they’re looking for a double for him for his latest film which is called Doppleganger.

They want somebody who not only looks like him, but it a bit more fit and slightly younger looking.

The “other guy” in the movie is a priest, and Bruce plays this gangster who has murdered a nasty mob character, and so he goes to confession, but it turns out the priest behind the screen looks exactly like Bruce!

So the police arrest the priest instead and Bruce ducks into the vestry and grabs a priest’s shirt and has to impersonate the priest.

Early this morning I got the call from Hollywood and they’re flying me out there for a screen test.