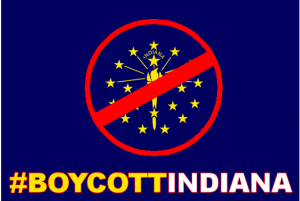 What troubles me most about the hysteria surrounding the recent religious freedom legislation in Indiana is the amount of ignorance about the issue.

Are Americans really so stupid? Are they so easily swayed by a bit of propaganda and shouting?

I’m afraid so, and the visceral, emotional reaction to events is not simply a symptom of stupidity. It is a symptom of the dictatorship of relativism.

You see, if you don’t believe there is any such thing as  truth, then why inform yourself of facts and why bother to think things through?

The only response is the gut level, emotional outrage that we are seeing in our streets.

More on this later, but this article is one of the best sarcastic reactions to the frenzy that I’ve seen yet.

The writer points out that if you want to boycott Indiana you had better boycott every other state because virtually all of the states either have similar freedom of religion statutes or they have court decisions that set the same precedent.