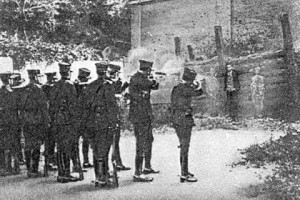 The execution of Fr Miguel Pro

So much talk amongst right wing Catholics of the erosion of religious liberty, the collapse of all things and the coming persecution. Talk of government detention centers and priests being shot like Bl. Miguel Pro.

I don’t think they get it. That’s not what it will be like.

There will be no martial law or military in the streets. That would appear to be so un-American! The officers who enforce the mandate will be lawyers in suits bearing legal documents. The battles will be in the courtroom. The penalties will seem just to the majority of people because we are in a democracy and those who disobey the law need to be punished, for it is the law of the land, and after all, if they had not done anything wrong they would not need to worry about anything!

To disobey the Mandate will seem so obstinate and unreasonable, for the State will not seek to close down any churches. Instead it will support the churches. Clergy training will be paid by the state. The church buildings will be maintained by a church tax which will be called the “tithe”. Clergy will remain in their posts. Their dignity will be respected. All they will need to do is sign certain documents which ensure their safety and their freedom of worship in return for acknowledging the authority of the State (in civil matters only of course) These documents will be worded in such a way that a conscience clause will be admitted. The State will control the church “insofar as the law of God allows.”

The State will bring in a sensible recognition of the validity of orders between the Christian churches. For practical reasons the Episcopalian priest or the Lutheran minister will be able to exchange ministries with the Catholic priest just as the Episcopalians and Lutherans already do. It will be a practical matter. Nothing theological will be implied for the Ministers of State would never presume to infringe on the theological aspect of the church. That would be above their pay grade. The orders will be interchangeable because the two churches are already so similar, and furthermore, many Episcopal priests are former Catholics and so have valid orders. This will smooth over the inconsistencies.

Many Catholic priests, after all, agree with the Episcopal doctrines and are in favor of married priests, women’s ordination and homosexual marriage. Furthermore, the majority of the Catholics in the pews have no real problem with these things, and they see the sense of the government’s re-organization of the religious life of the country. They never did like the noisy ‘neo con’ Catholics with their constant harping on about abortion and being homophobic and obsessed with sex. The government’s solutions, it will be agreed, will bring peace to the whole situation. Common sense will prevail.

Oh there will be the complainers to be sure.  Continue Reading