The Day I Met a Saint

The Day I Met a Saint 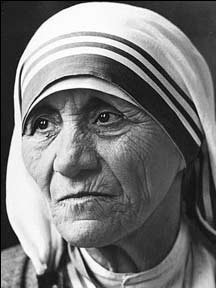 I went to India with a friend named James when we were both Anglican priests. We stayed in Calcutta for a few days before going into the Himalayas trekking, and James suggested we take a tour of Mother Teresa’s homes.

So we made our way through the streets of Calcutta to the little side alleyway leading to the entrance to the Mother House. There was a little sign on the door saying, “Mother is in” or “Mother is out”, and the sign said, “Mother is in”.

When we went through the door a young Indian sister said, “Would you like to meet Mother?”

So we waited for a few minutes on simple wooden benches and then Mother Teresa came out and shook our hands and asked where we had come from. “Have you come to give you life in service to God’s holy poor?” she asked.

I felt not too big. I had only come as a curious Protestant tourist. I was tongue tied, but James was quicker off the mark. “We’ve only brought you a check.” he said.

She thanked us and asked another sister to show us around, so we had the tour of the Mother House, the home for the dying and then we were taken around various other homes around Calcutta.

What was it like to meet a saint? My main memory was of an intense kind of reality. Mother Teresa was a connector to another world. She was a kind of human wardrobe that leads into Narnia. Meeting her and spending time in the Mother House opened up a new dimension for me–something I had never experienced before, and this sense of reality–this new level of awareness made me feel both small and great at the same time.

Small because of my own inadequacy and frailty and sinful selfishness and stupidity in the presence of that reality, but also a great-ness, knowing that I was not only a fellow human being, and therefore had the same capacity for greatness as Mother Teresa, but also because I was her brother. I was also one of the baptized, faithful.

I also had the gifts she had, and all I had to do was say “Yes.”

And that also made me feel both small and great.