The Depth of Despair and The Fountain of Hope

The Depth of Despair and The Fountain of Hope 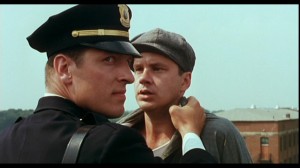 The Shawshank Redemption is an excellent example of how positive themes properly permeate a work of art. Art should never be didactic or preachy. The themes should never be up front and “inyerface.” Instead the theme is communicated most powerfully by being deeply embedded in the characters, plot, and conflict of the story. In this way the truth is embodied within the story in such a way that the truth cannot be stated without telling the story.

For example, there is only one scene in The Shawshank Redemption where the hero speaks openly about hope. But on a second or third viewing it becomes clear that the whole film is about hope—from the first scene where the hero contemplates suicide through to the last scene where all of his hopes have been fulfilled.