The Doubting Disciple and the Divine Mercy

The Doubting Disciple and the Divine Mercy 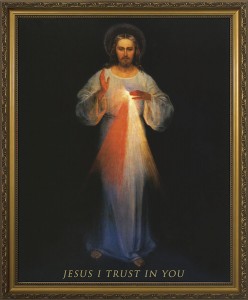 I’ve always thought it a special grace to think that the doubting disciple is featured as a key player in the gospel for the Sunday after Easter.

It is as if the whole church is saying, “See Thomas? It is okay to doubt.” But let me qualify that. It is okay to have difficulties.

Bl John Henry Newman said, “Ten thousand difficulties do not make one doubt.” What he meant by this was that there was a difference between a doubt and a difficulty, and the difference is in the heart of the person.

When we have a difficulty with the faith we are saying, “How can that be?”

When we have a doubt we are saying, “That can’t be!”

The first is an honest question–even if it is expressed in a negative or even an aggressive way.

The second is a dismissal of the faith even if it is expressed in a polite and rational way.

When we have a difficulty we have faith that is seeking to understand.

When we have a doubt we have no faith and we are not seeking to understand.

A difficulty is an affirmation even if it is not easy.

A doubt is a denial because it is easy.

Here’s where St Thomas comes in. We call him “doubting Thomas” but we should call him “with difficulties Thomas.” This is because, deep down, he did not have doubts. He had difficulties. He wanted to believe, he did not want to deny.

And who, having begun to think through their faith does not have difficulties? I would even say that if you have never had a difficulty with your faith you haven’t got faith. You’re got unthinking obedience or probably just unthinking “going through the motions” of religion.

Thomas did ask, and he did find, and the reason we know he is “with difficulties Thomas” and not “doubting Thomas” is because when he received the answer he cried out with all the passion of a true believer, “My Lord and My God!”

And this is what I learned from the Divine Mercy image this weekend: that it is not only an image of the resurrection, but it is also an image of the Lord appearing to Thomas. What is Christ’s upraised hand except an invitation to Thomas to put his finger in the nail print? What is the Lord’s lifting of his robe to expose his side except him inviting Thomas to place his hand there on the wound from which flowed the blood and water out of which the church and her sacraments was founded?

The Divine Image therefore invites all of us “with difficulties” to ask and discover the answer, to seek and to find, to knock and to have the door of mercy opened to us.