The Face of God

The Face of God 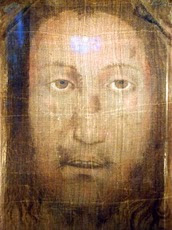 Paul Badde’s book The Face of God makes a good read for the Easter season. It is a spiritual detective story of sorts in which Badde explores the claims for the image of Christ at Manoppello being the original veil of Veronica.

The mysterious image is imprinted on a transparent piece of cloth, and the image of the Lord is visible from both sides. The history of the image is contradictory and unsubstantiated and there is virtually no history documented from before the Middle Ages.

This is one relic that is both difficult to accept and difficult to reject. On the one hand, the image looks, on first inspection, to be obviously painted. You can see what seem to be brush strokes and fairly crude shading on the face. On the other hand, the image is truly marvelous. It turns out to be imprinted on an amazingly rare fabric called ‘byssus’ or ‘sea silk’ or ‘mussel silk’. The stuff is woven from the filaments some mussels spin out to anchor themselves to the sea floor. It is extremely fine–like gossamer– and in ancient times it was extremely precious. It is an ancient fabric with a royal connection. It has been found in the tombs of pharaohs and is still extremely rare and unusual.

Furthermore, byssus can best be described as ‘woven threads of mother of pearl.’ Therefore it is waterproof and flame resistant while still being very fine and transparent. It is also extremely tough. Also, like mother of pearl–it is resistant to dye and paint. In other words, you can’t paint on it. Therefore if it is a man made image, then the image of Manoppello has been produced using a technology unknown even to the few experts in mussel silk who still survive.

Going against the image are the opinions of experts who routinely reject it as a medieval artwork. The problem is, no one has found anywhere any medieval artwork that remotely resembles it. The other ‘Veronicas’ are, on inspection, ordinary paintings on board or fabric. There is simply no other known artwork painted on byssus, and the only icons of Christ that resemble this one could very well be later copies of this astounding original.

The last thing which is difficult to ignore is the contention that the image of Manoppello matches perfectly the image on the Shroud of Turin. When the two are superimposed they make a perfect match. Or do they? Do they fit perfectly as they are, or have two reproductions been enlarged or reduced in order to make them fit?

Like the Shroud itself, there is an intriguing elusiveness about the image of Manoppello. Just when you think you have de-bunked it some other strange and fascinating details is discovered which makes you think again. Just when you have decided that this is a supernaturally produced image of the risen Lord Jesus Christ something is discovered which undermined the history, calls into question the theories and makes you pull back.

Whatever it is, the image of Manoppello is intriguing and absorbing. Badde’s book is professionally written by a life long journalist covering Vatican affairs. It’s well researched, balanced and objective. However, like the renewed and never ending interest in the Shroud of Turin–I have a feeling that this story will run and run.

My recommend? The Face of God is an excellent book and a must read for Easter.