The Facts: Atheism is Dying Out 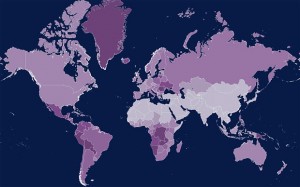 We often hear from atheists how religion is dying out as mankind comes to see the clear light of reason.

Atheist “intellectuals” speak disparagingly about religion and predict that mankind is on the cusp of a new age in which religion will simply disappear as science, technology and reason are in the ascendant.

The facts indicate exactly the opposite. It is religion which continues to grow around the world while the statistics indicate that agnosticism and atheism are dying out.

While the numbers of those who are “religiously unaffiliated” is predicted to rise in Western Europe and the United States, in global terms their numbers are shrinking as Christianity and Islam continue to wrestle for spiritual domination in the world.

According to the Pew Research Centre, the religiously unaffiliated – referring to atheists, agnostics and other people who do not identify with a religion – are declining as a share of the population.

Sixteen per cent of the population was unaffiliated to a religion in 2010 and Pew predicted by 2050, this would fall to 13 per cent, mainly because individuals in this group are older and have less children.

The huge growth rate will be among Christians in Africa.

Furthermore, while the rise of Islam is looked on with dismay, by 2050 Christianity will still be predominant

It is widely known that Islam is increasing globally but despite this increase, by 2050, only two more countries (51 in total) will have a population of Muslims that is more than 50 per cent.

According to the projections it is not until the turn of the century that Muslims will begin to overtake Christians, and then only by 1% worldwide.

In Europe, however, the decline of Christianity and the rise of Islam will continue.

By 2050, the Pew report predicted that 30 per cent (2.8 billion) of the population will identify themselves as Muslim compared to 31 per cent (2.9 billion) identifying themselves as Christian. In Europe, it is suggested that by 2050, 10 per cent of the continent will be Muslim and in the US, it will become the second-largest faith.

These projections are based only on demographic trends. We should remember that most predictions like this end up being wildly inaccurate because they cannot predict a whole range of other variables. Here are some unpredictable variables which could affect these predictions:

The bottom line is that religion is here to stay, and the predictions are that all religious groups will experience growth through the end of the century.

Atheists and agnostics are the only ones (along with Buddhists) who will see their numbers decline.